Today is the last day for Teletext UK. From now on the Brits will have check the arrival and departure times for planes on their computer or IPTV screens. Only special services like subtitling and the results of horse race betting will be available on analogue screens and can not be moved interactively. This will be the real end to teletext on UK television. Teletext had already been given up by the BBC and commercial broadcast companies and had been handed over to Teletext UK, a commercial company, making the service available through advertising.

In 1972, research engineers of the government owned BBC put together a number of new technological developments and found a way of making better use of the ordinary television signal.

They found that the British standard 625 line TV picture has several 'spare' lines, not used to form the screen image. Digital pulses, travelling as part of the regular TV signal, could with the aid of a decoder built into the domestic receiver, be formed into numbered panels of textual information called 'ages.' These pages look rather like pages of typescript, except that they can also include large-size letters and simple drawings; maps, graphs, diagrams, and so on, in any of six colours. Each page can carry as many as 200 words. A hand-held remote control unit could be used to select individual pages by tapping in the number of the page required. They called this system Ceefax.

The BBC was not alone in its discovery. The IBA, controllers of Britain's commercial radio and TV stations, were also developing a teletext system. They called their system Oracle: Optional Reception of Announcements by Coded Line Electronics.

Within six months the BBC had begun test transmissions of Ceefax. In 1974 all the organizations with an interest in the new information systems came together with the object of devising a unified standard. On 23 September of that year a trial experiment began for both systems culminating in the Autumn of 1976, with the government giving the green light to start full transmissions of both Ceefax and Oracle. 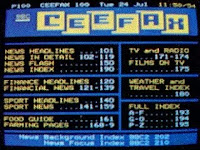 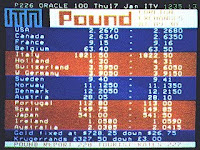 From 2001 onwards the service starts loosing the interest of the television companies’ management. Eventually Teletext UK takes over the services, but closes them as there is not enough advertisement revenues coming from the service.

So the country, where teletext started in 1972, will be without the service from today onwards. However on the continent, teletext is still going strong in countries like Germany, The Netherlands and Belgium and, of course , in France, where they have their own system Antiope.In the Netherlands for example the Teletekst service is still a popular service with the public broadcast, but also with the commercial broadcast stations. In fact Teletekst of the public broadcast system will celebrate its 30th launching day on April 1, 2010. The commercial stations, which only started in 1989, have used teletext. The use between the public service and the commercial service is different as commercial teletext contains pink services. So far nonen of the continental services is thinking about giving up the eldest consumer new medium.