At last, the portable electronic newspaper

The Belgian financial newspaper De Tijd has announced that it will start a trial with a portable newspaper. From March onwards 200 subscribers of the Belgian financial newspaper will receive the newspaper on digital paper with a mobile/cell phone link-up. The basic technology will be provided by iRex Technologies. The online technology will be provided by Belgacom. The University of Leuven/Louvain will research the trial. At last, the dream of the electronic tablet newspaper, promoted by Roger Fiddler, will become reality. 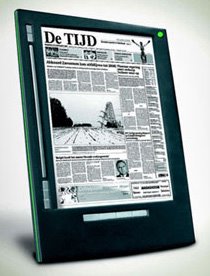 The technology of the tablet is based on the E-Ink and Philips technology of digital paper. The 8.1-inch diagonal monochrome Electronic Paper display contains 1024 x 768 pixels and supports 16 levels of grey (160 dpi); a colour screen is still under development and might be two years away from production. The dimensions are 155x216x16 mm. The advantages of the screen are: easily readable in the sunlight, onlooker can read the text also, standing next to the owner of the Iliad. The pages are static and do not play-out streaming or downloaded video. The reader offers iRex Technologies Delivery Service (IDS) for wireless broadband distribution. Content can be loaded by an internet connection, but also with a USB stick as well as SD and CF2 memory cards.

The newspaper is loaded into the tablet and can be displayed as a full page. With a stylo stories can be selected and zoomed-in. Pages can be turned. Here is the nice feature: the screen is only using power, when an action is taken (zoom-in or zoom-out ) or a page is turned.

De Tijd is the first newspaper trialling the electronic tablet. The company has a name in experimenting with new media. It was in 1988 the first newspaper company in Europe to put its archive on CD-ROM on CD-ROM; a job done by Elektroson. In 1995 the company started up a project with all Belgian newspapers to produce a daily personal news service under the name Central Station. As copyright issues were not settled beforehand and journalists called for legal procedures, the project was called off. However it started commercial life as Mediargus. Now the company realises the dream of Roger Fiddler. 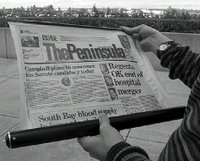 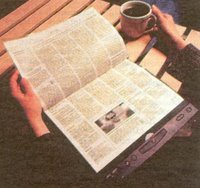 The portable electronic newspaper has been the subject of studies for years. And several prototypes have been developed, amongst others by IBM. Most outspoken advocate was Roger Fidler, a journalist working with Knight-Ridder. He has been working on all the concept for a long time, first with Knight-Ridder and later at the Institute of CyberInformation of Kent State Institute. In 1995 he toured Europe with a tablet which was not even a prototype. I still have a videotape of the electronic tablet in my museum collection. From March onwards Roger Fidlers’ dream will be a reality.