The sites of Dutch newspapers have seen the number of visitors and visits increase with respectively 38 per cent and 69 per cent over the first half year of 2008. Every month no less than 47 per cent of the Dutch, representing 6,3 million people of 13 years and older, pay a visit to one of the 31 newspaper sites for one or more times.

The Dutch population consists of 13,6 million people of 13 years or older. No less than 11,2 million people surf regularly. The most popular national newspaper sites are: De Telegraaf (24 per cent), followed by AD (14,8 per cent) and De Volkskrant with 10,1 per cent. Of the free papers De Pers is on top with 6,1 per cent and DAG and Spits follow with 4,6 per cent each.

The hardcore of the visitors can be found among the age group of 20 to 49 years. Six in ten persons read the newspaper regularly online. Most of those people are male and well to do. It is remarkable that the penetration among people with children responsible for the shopping in a household is very high. A growing segment is the youth; this group, which surfs 9,9 hours a week, is now online as frequent as the group mature people. Also the seniors are getting online regularly now.

The marketing organisation of the newspapers Cebuco does not agree with the thesis that online newspapers are a free alternative for the printed newspapers. The composition of the audience shows, according to Cebuco, that print and online are complementary. Great figures for the newspapers. And as these figures are collected by the third party STIR (Foundation for Internet advertising), it will give the newspapers the opportunity to impress online advertisers and generate revenues. 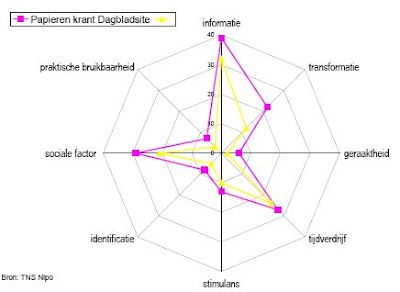 When I looked at the presentation of the figures, I noticed that there was a graph on the experience between a print and online newspaper. And I was surprised that the graph was exactly the same for print and online. The graph indicates the experience characteristics (from the top go clockwise on the graph) of information, transformation, touching, pastime, stimulus, identification, social factor and practical usability. I had thought that the online newspapers would be more touching as they use more colour and have movies on their sites. However the main characteristics of print such as information, pastime and social factor are similar. But the cartoons are just as touching for print as online. This example could indicate that there is too much similarity between print editions and online editions. The cartoon is in most cases not changed from print to online. This also means that no use is made of online possibilities such as animation. With the fac-simile edition of the printed newspaper and the online edition of the newspaper there is still new terrain to be gained with online newspapers.