No, it is not worrying. First of all these figures are just showing quarterly figures. There can be many reasons, including seasonal ones such a weather, to explain this drop; mind you it is not a loss! And with 82 per cent penetration, covering residential and work locations, The Netherlands is the leading country in Europe, according to Comscore. Besides the Dutch are using internet intensively with 23,4 hours a month, viewing 2,884 pages. This usage is beyond the European average of 23,3 hours and 2665 pages. Besides, these statistics are still lower than the blown up figures of Internet World Stats. 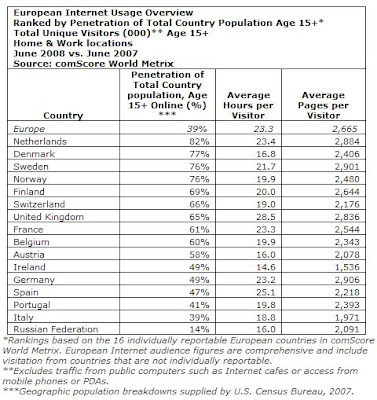 Internet adoption was highest in the Netherlands, where 82 percent of the country’s total population age 15 and older went online in June. Adoption rates were also high in the Nordic countries, with Denmark (77 percent), Sweden (76 percent), Norway (76 percent) and Finland (69 percent) rounding out the top five.

U.K. Internet users spent the greatest amount of time online, averaging 28.5 hours per user per month, while German Internet users recorded the most page views, averaging 2,906 pages per visitor. Although Russia had the fastest-growing audience in Europe, it ranked near the bottom in terms of penetration and page views.

Looking at those stats the penetration of internet in Russia is worrying. Of course there is still a market to be concurred, which is good news for the Russian ISPs and information providers (such as my good friend Anya). But it does also mean that a population has to be educated. Of course on the other hand other countries should start worrying once this starts happening. Just like in China a great potential of talent and working force will be released.

I stay amazed that the large European countries like Italy, Spain and Germany have not even reached a 50 percent penetration. In fact there is more than 40 percent difference between the leader of the pack and the last Western European country. This difference should be worrying to the European Commission.