Yesterday was an out-of-office day. Up to Nijmegen, most likely the oldest city in the Netherlands. For some the city might be known as it was an important city in the battle of Arnhem (A Bridge to Far). Other, the more sporty type, might know the city from its annual event of the Four Days walk (30, 40, 50 km).

I was there, however, as the company Digital Film Center Europe has moved from a very rustic place to Nijmegen recently. It is now based in the center of Nijmegen in a beautifully restored building called Arsenaal (Arsenal). The Arsenaal offers room to companies and institutes, preferably with a movie link. In the building the Joris Ivens Foundation is based. This Foundation manages the heritage of the movie maker Joris Ivens, who was born in Nijmegen. Close to the Arsenaal is the Luxor movie theatre, fit for digital movies 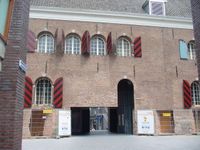 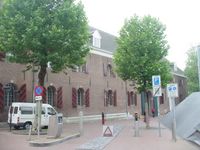 In this historic backdrop I had a talk with Floris Kolvenbach, who is in my perception a multimedia veteran. In the eighties he was already playing around with multimedia. He used multimedia in order to compose music and light events. Later on he moved more to movies and the restoration of movies and proves himself to be a gifted writer and script-writer. His company Digital Film Center Europe is a private company. 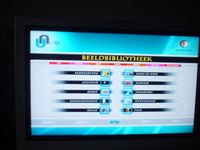 In this company he developed a product the Moving Image Cyclopaedia. Technically it is a multimedia content management system for multimedia assets (movies, photographs, animations, text, links, references to library books) and for multimedia asset registration (copyrights, owner, author). But he also showed what the system can do in The Moving Image Cyclopaedia (English for the Dutch term 'Beeldbibliotheek'. It is an educational multimedia product, specifically designed for libraries, providing access to a wealth of audiovisual documentary, linked with contextual information and books, available in local libraries. The application can be distributed best via LAN-, WAN broadband environments, given the high quality of the moving image materials.The Moving Image Cyclopaedia has been successfully introduced in the Netherlands, in the City of Almere, in the library and the Helen Parkhurst College and in cities of Arnhem, The Hague, ‘s Hertogenbosch, and Amersfoort. The next city in Europe will be in Germany, in the city of Düsseldorf (NordRheinland Westfalen). When Floris presented the Moving Image Cyclopaedia for the first time in Almere, the system contained 110 themes; now the system has expanded to more than 1100 themes and there is still no end to new movies and new themes.

We also spoke about new ideas. He gets excited when speaking about setting up a digital movie festival in Arnhem and Nijmegen. Such a festival could be a companion festival to Cannes. Movies showed in Cannes could be projected in Arnhem and Nijmegen at the same time through broadband connections. Of course you would love to have some of the stars at the showing also. But then he would have to develop a tele-transportation system for that. Can you hear Nicole Kidman say: ‘Okay, Scotty, beam me up’.

Walking back from lunch in the restaurant of Luxor movie theatre, he points to a small church opposite his office, which is disused at the moment. He hopes that one day he can exhibit his collection of robots there and have robots for kids to play with around the church.
Gepost door Jak Boumans op 10:39 PM