No PICNIC for traditional media companies

Traditional media companies in the Netherlands can not relax and enjoy PICNIC 06. That is the conclusion after a crazy week in the Netherlands. The annual Broadcast conference opened in broadcast city Hilversum, while PICNIC 06 started in Amsterdam on the same day. The broadcast conference looks at the present and future broadcast world; PICNIC 06 was promoted as a cross media conference, but turned into a web 2.0 happening. The broadcast conference is already 16 years old, while PICNIC 06 delivered its first edition. The broadcasters invited PCM’s CEO Mr Ton aan de Stegge, a representative of the newspapers, to their conference, and PICNIC invited Talpa’s John de Mol, an old hand in television industry, to sit down on the blanket. Is this just a passage in time or are companies repositioning to become as relaxed as the parties on the picnic? Oh, and the traditional publisher Wolters Kluwer puts its educational division up for sale. Where does that fit in?

Mr Ton aan de Stegge is a warrior. In his last job he was CEO of the telco Telfort and fought with KPN for the lowest tariffs. Eventually he sold the company to KPN at a fabulous high price. After a short period of rest he is back in the arena in the mood for warfare in his own company, in his own industry and outside. At the broadcast conference he posed the view that PCM was a newspaper company with potential, despite the increasing market reduction. So he announced a reorganisation of PCM, but not just the usual one. The HQ staff will be reduced by more than half, from 120 FTEs to 37. PCM will start a newspaper to be distributed for free (There are already two free newspapers, Metro and Spits and there are two newspapers in the making, one by Mr Marcel Boekhoorn and one by Icelandic investors). The existing newspapers should specialise: Trouw should concentrate on religion and the philosophy of life; de Volkskrant attracts singles; NRC Handelsblad should specialise in foreign affairs and economy. Other sectors should get their own newspaper. He would like to acquire Het Financieele Dagblad, but who would not. And he would love to see editions for the Turkish and Surinam people in the Netherlands. He wants to build communities and offer a range of media types such as internet, radio and tv. In this view is eventually not a place for the book division; the ten publishing houses are now officially financial participations; in other words, they can be sold. But his main message was that he wants to create communities around the newspapers. 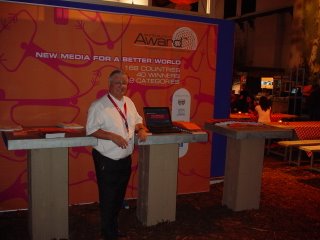 The World Summit Award was present at PICNIC '06. I am standing here in the wood chips; in the background you see the picnic tables.

The message of John de Mol at PICNIC 06 was simpler. The Dutch Financial Daily observed that John de Mol did not like pick nicking; he just walked in, delivered his speech, did not take any questions and moved out. He did not stay around to experience the pick nick atmosphere of the Westergasfabriek with wooden chips on the floor (were they impregnated), the wooden picnic boxes and the laid back atmosphere. His vision on the future is simple. Television will remain a mass medium as people need to have a common place to meet. But with the new communication infrastructure of broadband a new era is about to appear in five years time. As the consumer can participate in the creative process due to the new infrastructure there will be a profusion of information. Traditional media companies will have to distinguish themselves by creativity and professionalism.

But this was not all that happened this week. PCM and Talpa announced that they are going to set up a news video channel under the name Skoeps. With a small professional staff and 500 volunteers, the video channel should be come the largest video service in the Netherlands.

This is not just a passage in time. The traditional media companies are desperately repositioning, while the new media are having a picnic, attracting crowds with social networks like MySpace and Hyves, with video services like Flickr, YouTube and Dabble and with citizens participatory journalism in blogs and video journals.