Video in The Netherlands: Brevidius (2)

After the general introduction, Pier Tholen of Brevidius MultiMedia Projects took the floor. Brevidius is a production company with many a video project. Besides a presentation of their projects and many a link, Pier Tholes demonstrated the audience the video pyramid and he told about the results of a small survey. 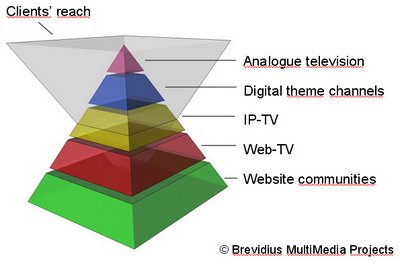 The video pyramid ranges from analogue television to web communities with a pyramid upside down indicating the reach of the video audience. A broad base audience can be found in combination with the analogue television. Contrary to this is the website community, which has a very small base of viewers. In all the phases of video examples are given. The pyramid give an insight in the numbers of viewers in relation to the five slices of video.

Interesting was the question Tholen posed about the future of video: will people participate? His company had executed a survey, which can not be seen as a representative survey of The Netherlands. For the survey the company talked to 386 respondents in a theme park (Walibi). The surveyors discovered that 84 percent of them had broadband internet. Man and women were equally divided; 55 percent had children and 30 percent was under 20 years. Of them, 70 percent look at videos on internet. Video recordings are made by 56 percent; 26 percent has a video camera, while 21 percent has a digital photo camera, 17 percent a mobile telephone and 8 percent a webcam. Of the 386 respondents 14 percent puts their video on internet. Asked why they participate there is a range of motives: pride of the result, sharing funny moments, sharing with friends, to be discovered, to win prizes. Asked when people would participate, they answered that they would shoot material when they would have equipment; if there were training sessions and if there was a special competition. From experience the company knows that 1 viewer in 1000 becomes an active movie maker, but that 1 in 3 will participate in voting.