Video in The Netherlands: a news video site (6)

I wrote before about the site of Skoeps, a site with two major Dutch shareholders: the national newspaper company PCM and the commercial broadcast company Talpa... Where YouTube is a fun site, Skoeps (Scopes) is a site, which bring generates the news in pictures and video. 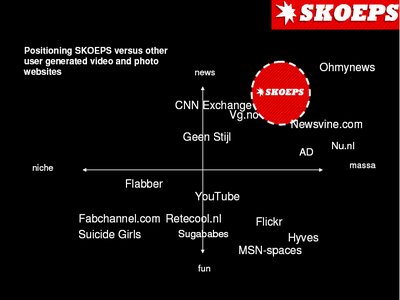 The site wants to break the publishing circle of the professional news companies. These companies will be alerted to a news fact, send a reporter and turn the item in. Following the journalistic trend of user generated content Skoeps explicitly turns the principle around. This had already been seen during the London bombings and the murder of the Dutch movie maker Theo van Gogh. The founders follow the reasoning, that there are eyes at every news happening, and these people always have recording equipment as photo cameras and video cameras with them. They need a post box to send in the photographs and videos, ready for publishing on the site. People can now share the personal experience of a news event.

The site has a number of categories, from regions to sports, from celebrities to fires. It has a RSS- and e-mailservice, the SMS-service, Skoeplogs, small new sites for individual Skoeps reporters and a community site for the cooperation of Skoeps reporters. The site is expandable with a digital TV channel.

User generated content can often be replaced by the expression free content and free licence. The site operator does not want to pay for the pics or the videos and feels free to forward on the pics and videos to other sites. Skoeps has other rules. The pics and videos on the site are for free. But the revenues from the pics and videos sold by Skoeps or onwards sold by a wire press bureau, will be split with the creator. This money will be an incentive for Skoeps reporters. Skoeps has made a deal already with the Dutch wire ANP, which can sell on the pics or videos to media and corporate communication departments.