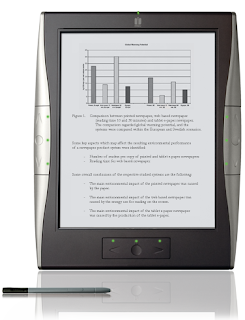 It was clear that Forbes had received all the information on the launch of the new iRex Digital Reader 1000 (see photograph). Al the details were correct. The launch did not have any surprises for the journalists present; I was not there. But the first reviews basically copied the press release; only a few journalists had been able to hold and touch the new reader and they were in a jubilant mood. ZDNet opened by saying that the new reader gave a Windows feeling; supposedly this is meant as a compliment. The digital lifestyle site and magazine Bright.nl sported the caption: Size does matter (we know that by now from all the SPAM mail). The manufacturer iRex Technologies went a step ahead in its press release by using the headline: iRex Opens New Chapter In E‐Reading. In my opinion this is too much as only colour or video would open up a new chapter. The introduction of the DR1000 is just a logical expansion on the iLiad.

The specs look good and interesting. The Open Source Linux will attract diverse applications. The size is interesting in a business environment and will not be dependent on book formats or newspaper formats. The DR1000 is clearly intended for the business market as it can show documents in the most current formats. Missing from this new reader is the bar to flip the pages back and forth, which is available on the iLiad. I thought that this was a new reading tool, but apparently not for the business environment.

But the disappointment of the introduction was the absence of the DR1000SW with Wifi, Bluetooth and 3G functionality, which will be available later this year. No price was mentioned in the press release about this version; however Forbes indicated that it would cost 850 US dollar, which would translate to 699 euro. To me this would be the most interesting one of the set. So why not introduce this one at the same time. Or are the DR1000 and DR1000S just teasers to warm up the market? I think there is more behind this introduction. iRex Technologies is getting nervous as Plastic Logic has been much in the news sporting its reader with 10,2 inch diagonal screen, which is due to be released in the second quarter of 2009. So, yes the DR1000 and DR1000S are teasers to warm up the market. And iRex Technologies will have to launch the DR1000SW before the second quarter of 2009 to keep the initiative. But by doing so it ill also have to set the price of the device, offering Plastic Logic the opportunity undercut the DR1000SW price of supposedly 850 US dollar.

I will be saving in the meantime in order to buy either the DR1000SW or the Plastic Logic reader.