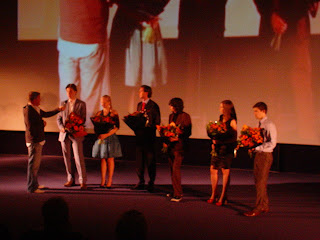 Last Saturday the movie Butterfly Tattoo, based on a novel with the same title by the British author Phillip Pullman, went on screen for the first time during the movie festival Film by the Sea in Vlissingen (Flushing) in The Netherlands. The production team and the cast were present. I have written before in a posting about this movie (and my small investment in the movie).

There are no reviews yet. Personally I found it remarkable that such a low budget movie had such a professional look. The movie was dramatic, emotional and entertaining with humour and fine music. It is also a very British movie in its language and the theme of class distinction. The pace of the movie could be speeded up in some parts, but the movie was not boring.

Presently the movie The Golden Compass can be seen in the theaters. This movie based on a novel by the same author was produced for 16 million US dollar. The Butterfly Tattoo was produced with a budget of a little over 200.000 euro. The money was picked up in two days after a front page article of the Dutch financial daily FD, describing the project of three students. The production team is presently negotiating about the distribution rights.