In the past week I have been in Finland. I was asked by a delegation of board members of vocational schools, dealing with print and media, and representatives of a knowledge centre as well as representatives of the employers association and a trade union to set up a program and accompany them on the trip. We left on Sunday for Helsinki, moved to Tampere on Tuesday and returned on Thursday night. It was a trip without a hitch, with a nice band of people and a hectic program (even in transit, the group had a mobile lecture on e-readers and e-books).

I was able to create a program for the group with the assistance of two very good friends, Irina of Culminatum in Helsinki and Cai of the School of Arts and Media in Tampere. I had some wishes, but they fleshed out the total program and made the contacts with representatives of the companies and the institutes. Also the details of hotels and restaurants were covered. There were only two small misunderstandings in the field of transport, but they did not affect the schedule.

It was interesting to see the difference between the program in Helsinki and the one in Tampere. In Helsinki we were bussed backed and forth. We had lunch at the former cable factory (Kaapelitehdas). This factory has been remodelled and now houses many young media companies. However it was closed on Monday, the only day we were in Helsinki. Sunday night dinner was at a mundane place Kappeli, a glass palace at the Esplanade and favourite hang-out of the composer Sibelius. 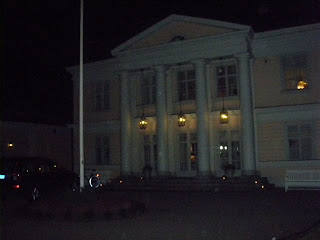 A highlight on Monday, was the reception at the residence of Dutch ambassador to Finland, Mr Beets and Mrs Heide Ehlert-Jürgensen. For some years my business partner and I have been in contact with the Technology and Science Attaché of the Dutch embassy, Mr Johan Hendriks, but we never could meet. But this time it was possible. For the reception also some Finnish people were invited, such as the chairman of the Finnish print employers association.

Tampere is a different city all together. It is a compact city, sandwiched between two lakes. We have done most transfers on foot from one school to another. The city has an industrial history, but is now moving to the service industry and education. It is less mundane than Helsinki. It was the first Finnish city on electricity and is now one of the spearheads in leading social media.

This was a remarkable feature. In The Netherlands everything is now cross-media. In Finland social media the hype word. However they fill it in. From my friend Jarmo I received the book Social Media: introduction to the tools and processes of participatory economy by Katri Lietsala and Esa Sirkkunen. I will come back to the book in a later posting.

By Thursday night the group had attended 18 lectures. It was time to relax and we took the touristic route (N130) from Tampere to Hämeenlinnen and on to the airport. We were lucky as on Wednesday night it had snowed. Tampere looked completely different. In fact the entire city lightened up. And of course the road through the woods and along the lakes was beautiful. But after Hämeenlinnen it was over with the fairy tale. The group grew restless as the final journey by plane to Amsterdam was nearing.

Cai has written a posting on the Tamepere leg of the visit in his blog. The posting has also a picture of the delegation.