Today the jury kept working on getting a shortlist of 18 to 20 entries. With some 80 entries you have roughly 5 minutes to have a look at the documentation and sites. Yet the first impression is often a first indication. But with the WSA database system the jury members can see where they are, how many entries they have dome, how many entries have been done by more jurors and they can look at their own ranking of the entries. By the afternoon, most of the jurors had made their shortlist. 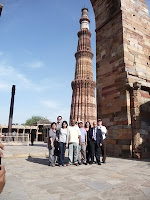 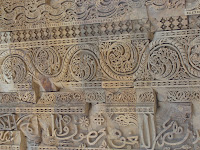 Later in the afternoon we were treated to a trip to one of the city’s heritage site, Qutb Minar, and a guarded bazaar. According to Wikipedia, Qutb Minar is an area famous for its tall minaret and the complex around it. At 72.5 meters, the Qutb Minar is the tallest brick and stone minaret in the world with 800 inscriptions of the name of Allah. Construction commenced in 1193 under the orders of India's first Muslim ruler Qutb-ud-din Aibak, and the topmost storey of the minaret was completed in 1386 by Firuz Shah Tughluq. The Qutb Minar is notable for being one of the earliest and most prominent examples of Indo-Islamic architecture. It is surrounded by several other ancient and medieval structures and ruins, collectively known as Qutb complex. The complex is listed as a UNESCO World Heritage Site. 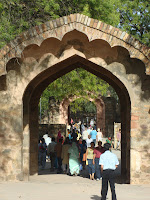 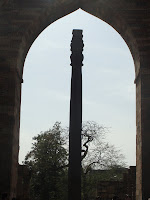 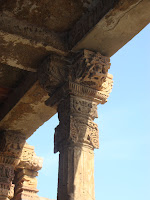 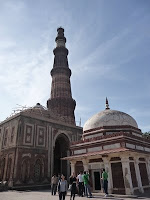 Later on we went to a bazaar. Guards with single and double barrelled guns were walking around there. The shops mainly sell textile and especially shawls. You will have to feel them and you get the famous story that they do not want to sell. Besides textile there are some cultural items around, but the pleasure of it depends on your taste. Officially there is no haggling about the price, but they are going down, if you want to acquire one unit; they might go up if you want to get more than one unit, as some ladies noticed. Normally I do not buy anything at those markets. Given all the trips I make to Beijing, Hong Kong, Dubai, Bahrain, Kuwait, Croatia, Cairo and Venice, I would have an eclectic collection at our apartment by now. Yet I could not resist the miniatures. I guess that they are produced and sold by the thousands, although the guy who sold it to me claimed that he was the artists, doing this kind of silk drawings and statue carving.

By late evening there were still some jury members evaluating their first round of entries. Others took time out after dinner to discuss matters, while some jurors went to bed to catch some sleep.