The iPhone is immense popular. I see people walking around with the device and using it for normal things like the weather, maps and of course for telephoning. I see them also use it for crazy applications like filling the screen with an image and sound of beer. It is a useless application, but something to talk about, when sitting at a bar. But for there are also applications which looked complicated in using all kind of devices.

One of those applications is the song finder. You keep your iPhone to a radio and let it listen to a song. In a short while it will recognise the tune and tell you, what song it is and who is the singer. Of course you are one tick away from ordering the song for storing in your iPhone. 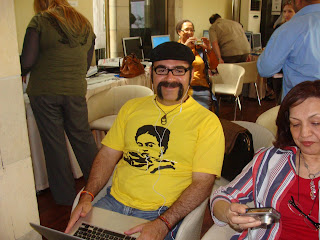 While talking to my Mexican eminent expert, Rudi Laddaga Lopez, he told me that he with his company was developing an application on hieroglyphics. He told that the Maya temples contain hieroglyphics. I told him that I had never realised that. But the application already in the test phase takes a picture of a set of hieroglyphics and processes them into the Spanish language. Interesting, isn’t it. I will be in Mexico later this year, so Rudi should demonstrate the application to me at a Maya site. I immediately saw new applications. In fact as we were with an international group of eminent experts, I told the story to my dear Egyptian colleague Effat El Shooky (the lady next to Rudi), as they have hieroglyphics in the Egyptian temples, pyramids and monuments. It would be really a time shifter or century breaker. Click a photograph and a few seconds later you can read the text in English or Arabic. Of course, the application can also be used for handwritten manuscripts for example in Old Dutch. I guess that the application needs some more calibration. But text can be read by you or even read for you and translated to the current language.

Playing with the idea of the song finder, another idea came up. There is a great group of bird watchers. They observe birds in flight, but often stand still when they hear the sound of a bird. You need a good memory for bird sounds. But recording it on the iPhone and processing it against a sample bank of bird sounds, should deliver the name of the bird, a picture and extra information. Of course you can after validation send the place of observation to a central point for recording and mapping. And all this with an iPhone.