During my stay abroad, the laying of fiber in the neighbourhood has continued. In the streets behind the apartment building where we are living, street by street was cabled, by opening up the pavements, laying the cable, branching it to the houses and filling the holes and reconstructing the pavements. But the cable has also been laid for the vintage boats in front of our apartment building, as most of them are used as house boats and people are living on them permanently; so with water, electricity and telephone, they now get fiber to the boat (FTTB). In the meantime also our apartment building has been passed. It is a kind of funny as they had to negotiate a corner with a head to end box of the cable operator UPC (see photograph). Now the circus of linking up to the homes and apartments starts as well as the signing up for subscriptions. 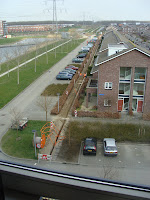 From our offices we can oversee the work in the street at backside of our apartment building. With military discipline, the fiber was laid, street by street. 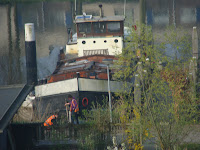 Also the house boats will be provided with a fiber connection. 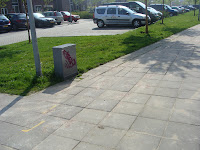 This is where fiber crosses the UPC headstation.


In our apartment building the linking up will start after tonight’s meeting of the owners’ association. In order to reach the highest floor, AlmeerNet needs the permission of the people living under the highest floor. As the linking up does not cost anything, it is likely that no one will object to the linking. But after that the battle for subscriptions between UPC and AlmeerNet will start. For the time being there will be a battle between UPC and KPN, as no other provider is yet available on AlmeerNet. The local press even speaks of a moratorium of one year for KPN, as they and Reggefiber, a joint venture with KPN, are financing the network.

Tonight the owners ‘association of our apartment building will meet for the annual meeting. A representative of AlmeerNet will be present. I am eager to hear how he answers questions like:
1. What is the difference between UPC net and AlmeerNet?
2. Is it true that KPN will have the sole right for one year to sign up subscriptions as there are no other providers, while in Amsterdam there are at least five providers.
3. What will be the costs of subscriptions as they have not been published officially and are different from town to town.
4. When will the AlmeerNet be available to new subscribers?
I think I can answer these questions now, but it will be interesting to see how the AlmeerNet representative handles the questions.