The bookshop chain Barnes & Noble with 1300 retail stores had already announced its rentree into the e-book; it had also announced that it would launch its own e-reader. Now the announcement is official and the e-reader, named the Nook (meaning a secluded place or space), can be pre-ordered at 259 US dollar to be delivered in November. The device has two outstanding features: a six-inch reading display and a colour touch-screen display with virtual keyboard and the option to pass on an e-book to another device or lend out e-books to one another. Now the battle for the Christmas season sales between the Kindles of Amazon.com and the Nook can start. 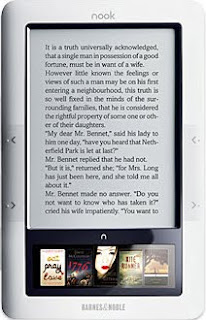 The e-reader is 7,7 x 4,9 x 0,5 inches and weighs 317 grams. So its thin and very portable. It has the most advanced E-ink electronic paper display, which can be reads in bright sunlight and inside. It has also a 3.5 inch colour touch screen LCD with one touch control and navigation. It downloads e-books via AT&T, the nation's fastest 3G network and Wi-Fi ( 802.11 b/g). In Barnes & Noble stores e-book previews can be downloaded for free. The Nook has a memory of 2GB or approximately 1500 eBooks. An expandable microSD can be slotted in so that you can buy an extra 16 GB memory card and store up to 17,500 books (more books on one card than in the library of the Paris based university Sorbonne in 1750!). The Nook can also hold 26 hours of MP3 audio. A battery life of ten days reading is predicted, but also a recharging time of 3,5 hours. As to the format of e-books, Nook uses the EPUB format and can use other e-Reader formats. PDFs, MP3s and graphics can be loaded to the Nook from a computer or from and a micro SD card. JPEG, GIF, PNG and BMP files can also be used.

Two features are outstanding in the device: the screen and the lending facility:
- the screen looks like a composite of digital paper with a colour LCD screen. As such this composite screen does not look ideal and might generate technical problems, but it heralds the colour electronic display;
- the lending facility is new to the English speaking world. According to the New York Times the lending facility is limited to one transfer for a fortnight, either between the Nook and another reading device like the iPhone or between the owner of a Nook and another person with a reading device. It looks like a great concession, but it is in fact very limitative as in The Netherlands Sony is using the EPUB format and offering lending facilities to four devices or persons.

Barnes & Noble was in the pre-electronic paper era already selling e-books, but gave up the adventure as the e-book sales were slow. But with the improvement of electronic paper Barnes & Noble is stepping into the e-book fray almost five years after the launch of the Sony Librié. But this time the prospects look better than ever. Barnes & Noble is in time with the launch of the Nook for the Christmas sales season. And the Nook makes a good chance to become a hit. The Nook looks to be top of the bill as far as state of art technology. Barnes & Noble has a book portfolio of 700.000 e-books. People can lend an e-book to a friend for a fortnight. And the price of the e-reader is competitive with the Kindles of Amazon.com and in fact with many other e-readers. Also publishers will be more pleased with Barnes & Noble than with Amazon.com. Barnes & Noble offers publishers 55 percent of the revenue, while Amazon.com asks 60 percent. The Nook will be sold only in the US (so I do not have to search the nooks of the apartment for my Christmas present). Let the battle begin!