BPN 1395 Another day in the history of internet?

By lack of a proper telecom history, October 29 has been claimed to be a historic milestone day in Internet. On October 29, 1969 the now 75 years old computer scientist Leonard Kleinrock is said to have sent his first e-mail between the UCLA computer and the computer of the Stanford Research Institute (SRI) of Stanford University in Menlo Park. The statement in many a press article today – even in a Dutch ministerial communication – is rather presumptuous; it creates more history than internet proper deserves.

What did Leonard Kleinrock do? In 1969, the US Defence department started up ARPANET. It was during the cold war and the Arpanet was intended to continue working as network, even if the network in one part of the country had been bombed out. Thus far computers had been linked up sequentially and if the defence computers in Washington, DC had been hit, the whole network would be out of order. So packet switched networks were developed. In these networks messages were put in packages with a destination address and the packages could take many routes in order to reach its destination. So when Washington had been bombed out, messages from New York could take another route to Los Angeles. Arpanet became the world's first packet switched computer network. In Arpanet the defence department , universities and consultancies worked together in the development. On October 29 communication between the nodes at Kleinrock's lab at UCLA and the lab of Douglas Engelbart, the inventor of the mouse, at SRI was established. So from that day onwards Mr Kleinrock could send files, no e-mails, to Douglas Engelbart and vice versa. On December 5, 1969 the network was expanded to the University of California at Santa Barbara and the University of Utah.

Did Kleinrock send an e-mail? No. He sent a computer file. When more people started to use the network they had to get a mailbox on one of the computers, which required an address consisting of a name and a computer name. Proper switches had to be designed. This resulted in the present e-mail address of a name, the @ sign and the computer name. This solution was designed by Roy Tomlinson in 1971. Asked what his first message was, he did not know, but supposed that it was the Gettysburg address, written in capitals. 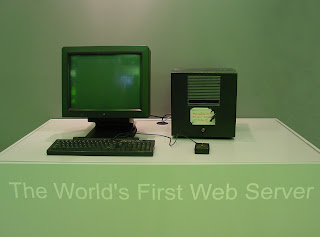 Internet proper only started when in 1989 the later Sir Timothy Berners-Lee proposed the World Wide Web (www), a hypertext system. In this system users could put documents on the net and link them to each other without a central administration. One year later the first web browser was published, the first web server installed and web editor introduced. In the same year Sir Timothy Berners-Lee built a website on a Next computer. That development has grown into internet proper. In 1995 there were 16 million users worldwide; at the end of 2008 there were 1.6 billion users. It is only internet when www is stamped on it.