The second day of the Finland trip was a heavy one. We will move to Hervanta, a new town with a smart industry such as Nokia Lab, just half an hour outside Tampere. We went there with two small coaches.
9:00 – 10:00 Nokia Research Centre/Nokia Innovation Centre
http://research.nokia.com/locations/tampere
The session at Nokia Innovation Centre concentrated on the way the company works on innovation. Political issues like the future of the mobile operating system Symbian and the new CEO are friendly avoided.
Nokia started research in electronics in 1977 and presented its first computers in 1992 with Mikko and Mikromikko. In 1991 the first digital GSM was launched. In 1992 the first portable phone Mobra Cityman was launched. Since 2007 Nokia looks at innovation as managing complexity. Since then research concentrated on four areas:
- Sensing & Data Intelligence;
- New User Interfaces;
- High performance mobileplatforms;
- Cognitive Radio.
In these areas research should deliver breakthroughs, cutting edge technologies and provide alternatives in unchartered territories such as 3D or mixed reality.
In order to reach innovation by co-creation. Nokia works together with universities in joint projects. It also receives public funding from the innovation agency Tekes and the European Union. In Tampere Nokia has a contract with local universities (TUT, UTA and TAMK). In this framework there are 16 professors involved and some 50 PhD researchers. Nokia offers collaborative meetings, discusses topics and uses the open call for proposals and grants. The lifecycle should have 5P’s as results:
- Publications
- Patent
- Publicity
- Prototypes
- Products

10:30 – 11:30 Tampere College, Hervanta: Qualification in Publishing and Printing (Hervanta)
- Study Programme in Layout Design
- Study Programme in Printing Technology
This department of Tampere College teaches students printing and lay-out design. It was for me like going back in time. Printing machines and even lead fonts! It was an ink sniffing occassion. In the same building the students have digital design using high tech computers; of course Apple, the symbol of the typographic community. 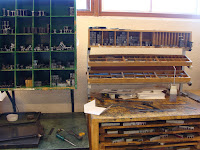 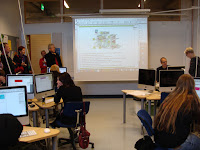 11:30-13:00 Lunch at Tampere College (in Finland lunched is served early). For the afternoon program we got into the small buses to go back to Finlayson in the center of Tampere.

14:00 New Factory: The collaborative innovation engine room
http://www.demola.fi/
In Finlayson we went to Demola, the demo factory. Here students design solutions for products and services on request of companies. Presently it has delivered 30 products. The time from idetion till evaluation and follow-up lasts 3-8 months. This year a summercamp was held in which 9 problems were posed to teams to be solved. One product was a game, the Super Awesome Fighters, created with tools from Nokia. The licenses to the game stay with the originator and will deliver some money. 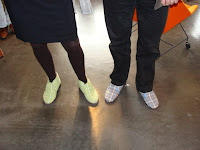 Tampere has been an active municipality in the digital world. It has had a program e-Tampere, I guess since 1998 or perhaps even earlier. Now the program is named Creative Tampere. It is oriented towards attracting creative industry. The municipality puts 7,4 million euro in the program. Support from Tampere institutions and companies should bring the total to 40 million euro, while the total revenue out of this effort should be 100 million euro. One of the activities supported by Creative Tampere is the HUB. This is a community which wants to be the center of social innovation. The HUB has 2 to 3 events a week such as salad events, speeddating by companies and dinners. The visit to the HUB started with changing shoes for houseshoes, sold by one of the HUB members.

Late in the evening a group of Dutch delegates went for dinner and climbed over the rocky hill, against which Scandic Hotel Rosendahl has been built. It was a good choice of restaurant.