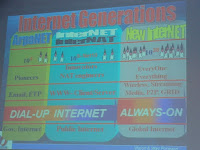 The second day of Mindtrek started with a view of the future. Latif Latid, the president of the IPv6 Forum, spoke in the plenary on the need to change the IP address from version 4 to version 6. He urged the Fins in the audience to press the politician to have IPv6 introduced.
His presentation was larded with historical details. IPv4 originated in 1983 and resulted in 1992 in The Web. In the meantime, from 1986-1995, the US Government and the US military pursued the OSI telecom standard. It was in 1992 that the US Congress approved the use of NSFNET (National Science Foundation) for commercial traffic. In 1993 the US Government moved to IPv6.
His conclusion is that Internet is loosing its original design and needs to change over to IPv6 fast. IPv4 is good to connect a quarter of the world to internet. Google scans only 17 percent of the present Internet. IPv6 can do the whole internet. IPv6 can connect the whole world. Besides, more than 50 billion of devices will be connected to the internet in the next 10 years.

After the plenary a choice could be made out of four tracks: social moving pictures; social machines; war stories and a workshop on designing social network games with soPlay heuristics. I chose for the social moving pictures. Tommi Pelkonen of Frantic Media in Helsinki has been in interactive marketing for years and has worked in The Netherlands and Hungary. He introduced the subject and the speakers. It is all about story telling. It is the oldest media format, while video is fairly new. 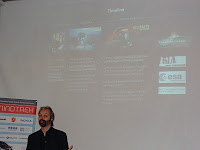 Tommi introduced Christian Fonnesbech an interactive media producer from Denmark. He has been in this trade since 10 years and has made interactive, cross-media productions for banks and other companies. I met him some 10 years ago when he had just left the movie industry for the interactive industry. Now he is creating big production. As promo for Mindtrek he wrote:

"Facebook is wonderful on a good day. Most of the time, however, the experience is like inviting your friends over to watch TV and discovering that there is nothing on. You sit around, trying to start conversations, chitchatting about the weather and making jokes.
But what if this is just the beginning? What if the Internet is destined to become a dramatic, narrative medium – just like other media? Books, Films, TV, and Console Games have all become storytelling media.
My presentation will show some of the cases and methods that have led us to the development of our online, storytelling format, including our global breakthrough from 2009, The Climate Mystery."

Christian Fonnesbech is a new kind of director. In over 30 different online projects, he has explored the Internet’s potential as a storytelling medium. Through various combinations of dramatic fiction and games, social networks, search, e-mails, mobile phones, webisodes, websites, teaching materials and more, Christian has gained unique insights into how to engage online audiences emotionally and interactively. He has worked with many different audiences, purposes and media formats. The Climate Mystery (2009) was a global breakthrough, developed in collaboration with partners such as Microsof and Discovery Channel.
Christian is Creative Director at the newly started The Quantum Room (TQR), a Copenhagen-based digital content studio, which has just become the first team in Denmark to receive Film financing for online fiction. Christian is a master of Film and Media Science. He has worked as a consultant for the Danish EU chairmanship, for a variety of film and TV companies, as well as for the MEDIA and IST programmes. 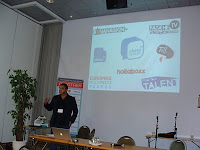 In summer of 2010, The Chew TV Network was commissioned by the UK’s leading youth development agency, Creativity Culture in Education, to develop a nationwide social moviemaking experience that would see thousands of young people from all over the county be given the chance to let the UK government know what they thought about Culture and how it affected them.
The TELL US project is based on the premise that exposure to the arts and culture can transform the aspirations, attainment, skills and life chances of young people and over the course of 3 months, Chew TV developed a unique approach to capture the imaginations of thousands of young people through in a fun and exciting way.
From the development of the core brand messaging to the production of positioning movies to be used on the national tour, The Chew TV Network involved young people in every step of the production process to ensure that the content remained current and connected with young people on a level they understand and enjoy.