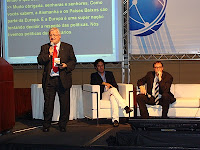 Today we will present the World Summit in the context of e-Inclusion and universal design. We will present with three people: Alexander Felsenberg from Germany, Luis German Lopes from Columbia and myself from the Netherlands. The Theme is World Summit Award – New International Paradigms of Accessibility and Usability. The introductory text in the brochure says: “In an international context entitled “Information Society” and known for the new media and innovations of Information and Communication Technologies (ICT), the digital and social inclusion must be promoted by recognising the creative use of digital and interactive media as to its content and diversity. In this sense, the discussion about the new accessibility and usability paradigms must occur internationally, involving all society sectors, like the World Summit Award, which will have its 2011 version dedicated to digital accessibility issues.”

View more presentations from Alexander Felsenberg.
The presentation went off well. We had produced a common presentation. Alexander profoundly went into the accessibility issue and Luis brought the finishing touch to the presentation. He brought in also a funny movie on liquid mounteneering or of people training to walk on water as a metaphore for working with accessibility. It was really funny to see guys running, negotiating a bend, stepping on the water in order to find themselves sinking in the water after four or five steps. One person in the audience complimented us with the presentation of 1,5 hours. It was a good thing that we did not have three separate presentations, but showed to be a team and kept the attention span longer.

The conference drew to close with a few more presentations, one of which was by a Tunesian professor who appeared to present a WSA mobile nominee with a MMS service for the deaf. I will dedicate a separate posting to the subject. 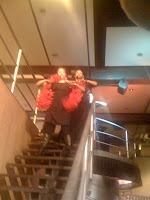 After the conference the speakers were invited for dinner in the restaurant Brooklyn. In this music restaurant the serving personnel also brought a show with songs from musical such as Cabaret. It was very professionally done. I kicked on the song Aquarius from the musical Hair and I was not the only one. A consultant was singing along as well, knowing all the words by hard and yes we were of the same generation. It was a nice close of the official part of the conference. Tomorrow we still have a wrap-up session to make an inventory of actions Sao Paolo should take in order to serve the disabled people better.