, TAMKToday we do not have to rise so early as the Pre-Mindtrek activities start in the hotel. So no hastening in order to catch the Telitaksi. We can slowly take breakfast and go to pick up the Mindtrek badge. 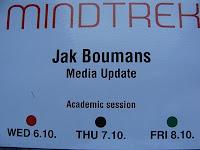 The Pre-Mindtrek activities consist of two major tracks: Academic and Cloud Computing. The Cloud Computing stream is a full day session. The Academic track has five major streams: gaming, social media, open source, ambient media and user experience. I have chosen for social media. I would almost say of course, as we are in the country were social media was embodied first. Finland was in my book the first country to develop social media with the Habba-hotel, a social media site for kids. In 1999 it received a Europrix award and has had lots of success with licensing the concept.

The Academic sessions were really academic sessions: some presentations were very obligatory and just an excuse to come to Finland, but I also heard some interesting stuff. Early in the morning I was confronted with social media and public transport. Not exactly a line of research I would have thought about. Yet one of the first slides I remembered. It was about a metro exit where the staircase had been decorated with the keyboard of a piano. When piano music was played more people took the staircase than the escalators. But when I saw it first I did not see this as an exercise in social media. Now the researcher demonstrates with examples that public transport can do with an experience by using screens and mobile applications. It looks promising, but I guess that first many transport systems, like the Dutch smart card system, will have to be made more efficient before people experience public transport as a joy.

This presentation was followed by a presentation with a high igNobel Award level. The subject was users as sensors. It was a filmed presentation as the researchers were now based in Stanford temporarily. The long paper has as subject creating shared experiences in co-creational spaces by collective heart rate. That was really a mouthful for an experiment whereby members of the audience of an ice hockey event all received a device with which the heartbeat could be collected and totalled. Conclusion: whenever a goal is in the making the collective heart beat rate goes up. Of course. 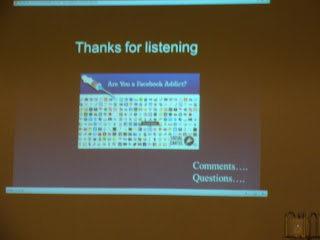 In the afternoon I sat in on a session named In the face (book) of daily routine. Greek researchers had studied the use of Facebook by 60 students. Their conclusion: the students only use Facebook as a waste of their time. They want to be busy with Facebook, for then they do not have to be busy with something else. I have my doubts about this research. First of all the group is very onesided, only students. But I think that this group is online and using Facebook just in order to present themselves to peers and claim a place in the community. As such it is not a waste of time. Secondly the choice of a single group like students does not deliver interesting results. No attention was paid to Facebook and business. The researchers thought that LinkedIn was more apt for that. That is not my experience. LinkedIn is too restrictive with its premium messaging and putting up events. More can be done with Facebook. I hope that the Greek researchers can do another research project on Facebook.