The seminar was held in the monumental building of the Royal Dutch Academy of Science in Amsterdam. It was a small group of consortium partners and invited people from Italy, France, Slovakia, UK and The Netherlands. The seminar delegates received in their documentation The Scienar DVD, produced by Nicholas Mee of Virtual Image Publishing Ltd, with all the documentation and presentations of the two year Scienar project.

The presentations went according to schedule. It was a varied program ranging from an survey of science and art to a presentation about the essence of the Romanian sculptor Brancusi, a presentation of digital photography and two scientific presentations on mathematics and arts. A surprise presentation was one on the Baptisterium of Pisa. The seminar was closed with a digital music performance.

The historical overview of Dr Mauro Francaviglia can be reduced to three scenarios:
- Scenario 1: The Birth of Geometry at the time of Greeks: the role of proportions, the music of Kosmos, Platonic Solids, the Golden Mean.
- Scenario 2: The Role of Symmetry and Prospective in Renaissance: the birth of Perspective and Projective Geometry, Simmetry in Art, the beauty canons in Painting, Architecture and Music.
- Scenario 3: The New Mathematics and Art of XX Century: Curvature, Impressionism, Cubism, Fractalism, Motion and Fourth Dimension, Digital Art. 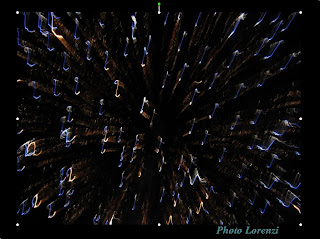 The presentation on digital photography was by Marcella Lorenzi. Her digital photography had started with a mistake she made making a photograph. These days she exhibits het photographs in Paris at a UNESCO exhibit and at Toronto. She consciously paint with her camera. Her statement about “Photography, and Digital Photography in particular, is uniquely capable of recording a space/time image. Yet to photograph a space/time image is quite complex. For example, the correct shutter speed to depict motion varies considerably depending on the motion of the subject and the artistic intentions of the photographer. In addition there are many other variables to movement. And to record this kind of imagery successfully, the photographer must have a tool that allows instant display of the imagery just taken so that adjustments can be made based on that feedback - which is the very powerful capability provided by Digital Photography.”

The digital music performance shook the Academy offices for half an hour as their floors are wooden floors. However it was an interesting performance. Leonello Tarabella had brought his own installation and connected this to an movie theatre amplifier. But standing between a type of beamer and a screen, on which for example a piano was projected. Then Mr Tarabella started to play the piano without touching a physical piano.

The whole seminar has been taped and filmed for a DVD production. Eventually the presentations in powerpoint and pdf as well as the filmed presentations will go online. One of the participants, Peter Heijens made his movie summary of the day and put it on YouTube.


Also Carek Kuitenbrouwer produced a movie on the Amsterdam SCIENAR seminar and specifically on the music performance by Leonello Tarabella.