It is now more than two years that I met Ramon Alberto Garza in Venice, Italy. He is the founder and CEO of the publishing company Brainmedia in Mexico. He was in Venice in order to collect his WSA Award for an electronic magazine his company produces. He was caught by the combination of the new media competition in the framework of the World Summit on the Information Society. He threw up the idea to have the next WSA Award ceremony in Monterrey. And after two years it is happening in Monterrey, Mexico. 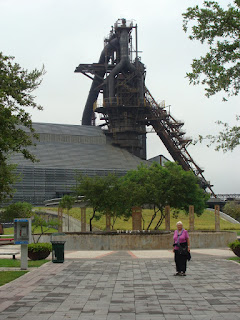 Monterrey is in the North-east of Mexico and is from what I can see in the past few days a very industrial town with a history of heavy industry such as steel mills. In the meantime most of the steel mills are gone. But you still can see the remnants everywhere. In the park, where once the steel mill was located there are many reminders of the past. At least the local government has done an successful preservation of their industrial heritage. You find even parts of the steel mill plant in the rooms of the hotel in the park. In my room there is a piece of heavy metal bearing the number 23687. And it does not stop with artefacts. While walking to the conference venue, I met a guy who had worked in the administration department of the steel company for some twenty years and came back now to the pension office to get his papers in order.

Last night the winners came from all over the world, Canada, Kuwait, Belgium, The Netherlands, China, to Monterrey in Mexico to celebrate their selection for the award and for their product. And a delegation of the jurors has also come to this industrial Mexican town for the celebrations and in order to get acquainted with the winners and their products.

But the event has grown. Now there are the WSA Award Gala, Conference and Exhibition and two more events: WSYA, the youth awards and a conference of the UN Global Alliance for ICT and Development (GAID). All in all it will be a busy schedule for the delegates. But also the exhibition is interesting. It is modeled after the caves in the mountains, which surround Monterrey. The 40 Content Caves will showcase a new media exhibition of its own class. By bringing together government, business and civil society the WSA supports the creation of synergies between suppliers and users of communications applications and assists in connecting practical applications worldwide.