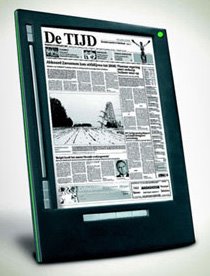 The Belgian financial newspaper De Tijd has started its digital paper trial with 200 subscribers for the next three months. The trial will be followed closely and double checked with twenty other newspapers.

The Belgian financial newspaper will be published on the Iliad screen, developed by the Philips spin-off iRex Technologies. The basic technology differs from the earlier eBook screens as the iLiad sports a black/white screen and the screen only consumes electricity upon the turning of the page.

The trial concentrates on three points: news production, usage and advertisement. Fresh new pages will be beamed to the iLiad by wi-fi. Despite the possibility to refresh the stock quotes in real time, De Tijd will only be refreshed a few times a day.

The publishing company could make a selection of users from the five hundred expressions of interest. The newspaper company sees this as a signal of market readiness. The trial will study the usage of the newspapers by the users. How do they use consume the news; how do they react to advertisements. The user friendliness of the interface will be most important.

The trial is not only directed towards the news consumption of the users, but also at the advertisements. In principal De Tijd will have three kinds of advertisement: a banner, an interstitial and a click advertisement, offering information in the mailbox. Location based advertisements may be offered during the trial.

The results of the trial will be ready by September. De Tijd hopes to launch the iLiad edition next year, so that redaers can download the most recent eduiton of the newspaper on their iLiad through blue tooth, wireless or by hotspots.