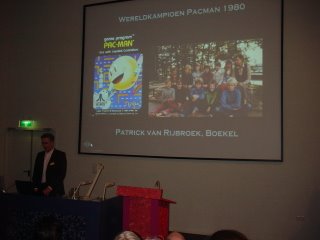 In his after lunch speech Emiel Kanters, accountmanager with the Dutch educational publisher ThiemeMeulenhoff dished up a triviality from Dutch game history. He showed a picture (see above) of the 1980 Pacman world champion, Patrick van Rijbroek.

In the late afternoon of the conference it got more serious and there were break-out groups. One of the sessions was intended for publishers. Some of the national educational publishers were represented. The discussion shed quite some insight on how the (traditional) publishers look at these developments.

And they are very hesitant. They are faced with many questions. Should we make a game as an extra to a learning method or part of it or should we base a method on a game. Another problem is the teacher, who is usually above 35; they might work with a PC, but it is questionable whether they are in games. Next question is of course: who is going to develop it? No bureau has a specialisation in didactics, game theory and design. And as one publisher said: ‘If a bureau claims to be able to produce this, I would be very suspicious’. Last, but not least, certainly with traditional publishers were the development costs. During the presentations some figures like 7 million US dollars had been used as development costs; given the Dutch target groups such a figure would be prohibitive.

But it was not only hesitation that was expressed. They received also some free consultancy. One piece of advice was to get as publishers’ group into touch with the recently founded Dutch game production association Benelux Game Initiative (BGIN) and start to work together. Of course they should also get in touch with colleges like HKU KMT for the development of prototypes of games, where a game prototype was made for the national Railway Corp NS. Or have a look at companies like RANJ with Pool Paradise. Another piece of advice was to look at institutes like De Waag, which developed Freq 1550, a game to familiarise school children with the history of a city. The publishers should also consider whether they could commission the development of a common rule set on top of which various games can be created. It was also interesting to see that the publishers looked only in the direction of the Dutch ministry of education and did not know anything about the 10 million grant for game development.