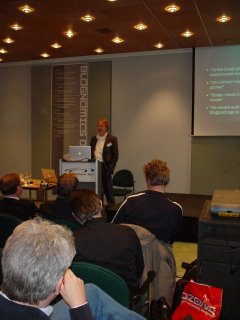 An annual report on blogs in the Netherlands was part of the meeting. The Netherlands is a small country with some 16,5 million people, internet and broadband prone. So what is state of art in the blogging country behind the dikes? The best person in the Netherlands to talk about blogs is Paul Molenaar the CEO of Ilse.nl, a search engine company, which also operates Web-log.nl.

Web-log.nl is the largest blog site in the Netherlands. Monthly 100 million pageviews are recorded for the whole site; on average 500 pageviews per month and 10 comments per weblog. But success has also its shadow sides. Every week, the management receives 3 letters from lawyers. Monthly 10 journalists request an interview. There is also intensive contact with police services.

Paul Molenaar also gave his forecast of new trends. Serious bloggers are clustering their blogs; cynically he added that the largest cluster would be a typo cluster. Video is going to be crucial. Traditional media like newspapers, radio and TV use blogs. There is a hunt for extreme blogs; in the coming year the slogan will be: death to mediocrity.

He also predicted that there will be some more revenues in the market, but less than 1 million euro. Of course it is still guessing about revenues as is clear from a Wall Street Journal interview with Alan Meckler of Jupitermedia and Jason Calacanis of Weblogs Inc. Calacanis estimates in the interview that you can make 1.500 to 5.000 US dollars a month with a good blog. Meckler is critical and calculates that you need 500.000 pageviews per month, which is unattainable presently. In another calculation 200 million weblogs share 16,6 million US dollar in revenues; this is 0,10 cents per weblogger. When Paul Molenaar asked the audience who made money with their webs, only two people raised their hands.