Only for noble people 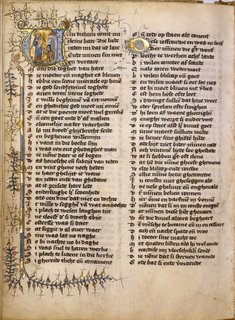 Recently there was an announcement of the National Library of the Netherlands, that one of the first Dutch manuscripts had been digitised and would be available in the virtual library. It concerned the manuscript containing one of the oldest Dutch poems Beatrijs.

Beatrijs in one of the top jewels of the National Library. It is a poem I (had) read at school. It is a medieval legend of a nun, named Beatrijs, who takes care of the chapel in the cloister. But overcome by love, she leaves the cloister and follows her lover. Seven happy years she has with him and gets two children. But when the money is gone, her lover leaves her, leaving her with the care of the two children and the needs of daily life. She works as a prostitute for seven years in order to feed her children. Daily she prays to Mary. Full of remorse she goes back to the area of the cloister. There she hears that a nun is still taking care of the chapel. Eventually she takes her place again and discovers that Mary has replaced her all this time.

It is an old legend, probably of the thirteenth century and has been translated into several languages. The manuscript in the National Library is the only text available. It is not an original manuscript, but a later copy of 1374.

Now the manuscript is available online and for everyone to inspect and read (if you can read medieval Dutch). It is now one of the web exhibitions, which the National Library has online, often with an English translation. 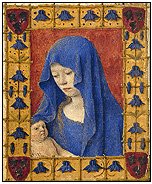 The thought is interesting, that a manuscript which was intended for a king or a duke, so for only one person, now can be seen by the whole world. Being a fan of medieval manuscripts and miniatures, I used to collect the facsimile prayer books especially made for the noble people such as Les Très Riches Heures du Duc de Berry and Les Belles Heures. Of the manuscript Les Très Riches Heures, painted by the three brothers of Limbourg, there is only one book. It is now in a box and never leaves the museum. The prayer book has now been digitised. I personally do not like the presentation on the site, but at least many more people in the world can get acquainted with the beautiful paintings. And once they get the taste of it, they can consult more European digital library treasures.