Yesterday was the public jury day of the Spin Awards, the Dutch interactive marketing awards. It is one of the oldest multimedia competitions in the Netherlands. On the public jury day the nominated entries are presented. The companies get 5 minutes to present their product and are grilled for five minutes by jury members. For the first time the public jury day was held in Amsterdam at a college for interactive media; a fine idea to involve students and companies.
The whole session lasted from 9.30h in the morning till 17.30h in the evening. Of course after 32 cases everyone, a drink is most welcome.

The interactive marketing scene in the Netherlands is dominated by Heineken. Three of the nominated entries came from the beer brewer, which has a tradition in advertisement and these days in interactive marketing in the Netherlands. Last summer – no World soccer championship, no European soccer championship, no Olympic Summer Games – Heineken centered a campaign around the weather and created a honcho, a bath towel and poncho in one. Another campaign was centered around a small barrel of beer; by soliciting consumers movies the campaign people received movies of what you could do with an empty barrel. The third campaign was a game, in which the consumer had to photograph spot codes.

There were some trends I noticed in the presentations.
a. Interactive marketing is starting to use MSN Messenger a lot. One of the (paid) games is Eccky. With Eccky you and a friend can produce a virtual baby and let it grow in six days. With 5 million MSN Messenger users in the Netherlands there is great market for this. The game aims at young people from 14 to 15 years old. It looks like the game plays on vicarious love as girls love horses around that age.
b. Viral campaigns were abundant. Many companies spend money on the creation of a campaign, but do not want to pay for media placements in newspapers and television.
c. Viral campaigns aim at free publicity.

One of the campaigns was done for the Red Cross Pakistan earth quake action. The bureau Publicis developed an effective banner campaign and collected a quarter of a million euro; the production costs of the banner were 9.500 euro. If the campaign had been developed as a Direct marketing campaign the production costs would have been 300.000 to 400.000 euro with a 1 million euro in revenues. Besides the internet campaign went all across the border.

What I missed in this year's edition of the Spin Awards was a category Narrowcasting and In-store. Having seen several samples in the past months, I had expected a separate category. Projects oin these areas will be more difficult to judge, but basically they are an extension of interactive marketing. 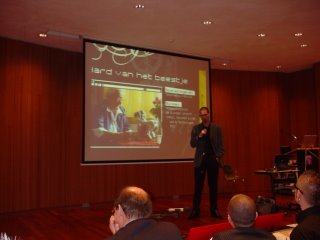 There was one project which did not fit in the competition, IMHO. It was a report of an experiment with a Sony Aibo. Students had tested the Aibo with senior citizens and made video reports of the meeting. It was interesting to see how fast senior citizens attach to such a robot. It was a first exploration of the opportunities. Although a sympathetic entry, it was strange to see this project as an entry. Even more now Sony is stopping the production of Aibo.

Next week on April 13th, 2006 during a dinner the prizes will be awarded.