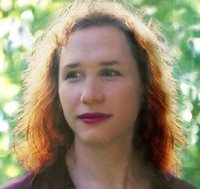 Cinema-goers often grumble that they themselves could have made a better film. They may soon get the chance, thanks to film-maker and Internet pioneer, Michela Ledwidge. In 2004 Michela received a £125,000 Invention and Innovation investment from NESTA (the National Endowment for Science, Technology and the Arts) - the organisation that backs UK innovators - to explore new ways for audiences to ‘fiddle with film’ as though it were a musical instrument. Her aim is to enable viewers to use a games console or desktop computer to modify the film as they watch it.

In Wired Jason Silverman wrote: "Michela wants her film to be more than watchable. She wants it to be remixable. She is now posting all of th raw material for Sanctuary, het 10 minutes sci-fi about a girl, her computer and a mysterious murder. She has nine hours of production footage, 90 minutes of sound effects and dialog, plus hundreds of storyboards, concept drawings and still photographs. Eventually viewers will be able to manipulate the cinematic elements with downloadable software called Switch".

This week she send around a mail to inform interested people about MOD Films' first production, Sanctuary. She writes:

We locked the picture a few weeks back and we're heading now into the final stages of post-production. Steve Parkinson has done a great job on the fine cut and HD conform. Huw Bowen has signed on to help me co-ordinate the VFX work that needs to get done.

For all of you who have expressed an interest in volunteering to get this finished, now is the time to re-confirm your availability. We'll be breaking the work up into manageable chunks so that people can help out as much or as little as you'd like. What we need to know is what you are willing to contribute, and of course what areas you are most familiar with.

We've got three virtual environments and two virtual characters to create, and plenty of user interface graphics, particles, treated images and miscellaneous other effects to bring to life. If you've got the time and are keen, drop me a line, we'd be very grateful!

As you may recall *groan* that this is an experiment in re-mixability, so we intend to make as many of the original project files available for re-use. If you want to contribute elements but would be using material that you are not comfortable about sharing, proprietary shaders for example, then let us know so we can work out an arrangement.

All in all, I'm REALLY chuffed that the film, a third of the overall pilot, has got this far on so little funding. I'm taking it (her?) to the Cannes Film Festival next month after an unexpected and unsolicited expression of interest from the International Critics Week. We haven't been able to pull the VFX together in time for the festival competition cut-off but at least we've locked the picture. Thanks to the Sydney production crew, we ended up switching to shooting on 35mm at the last minute and the resulting plates look lovely.

Finally, a couple of links to whet your appetite

My new showreel with a sneak peak at the film
http://thequality.com/people/michela/showreel.htm

'The Deal' for contributors
http://modfilms.com/archives/20050901_information_for.html