Piping internet to the TV tube (2) 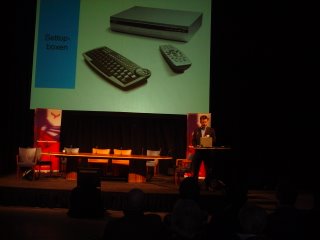 After the disappointing boxes preview, it was time to start the presentations. Erik-Jan Gelink, director Marketing Video UPC Netherlands, was asked to sketch the big lines of the developments. He started with the statement that since the start of television in 1951 hardly any innovation had taken place in television technology.

Presently intelligence is added with hardware and software. Settop boxes are coming up as media centers and HD recorders. Microsoft Xbox is in fact a media center in disguise, Gelink said. Now PC is connected with TV. The boxes come in various types: boxes with leads and wi-fi transmitters between the PC and TV.

Software is moving in different directions. Windows Vista is intended to make the PC into a settop box. Google Video and Yahoo Video is coming up. Blog television is coming up. Also interesting is the discussion about the distribution: centrally or by peer-to-peer. Also the recently launched P2P software Tribler was promoted as a cheaper distribution method for broadcast programs and video.

The TV world is not eager on digitalisation. Three industries are taking potshots at it. Hardware companies are flogging boxes. The software industry is aiming at distribution either through boxes and peer-to-peer networks, video-on-demand and at gimmicks like private channels. And on the skirts of the TV world people are looking at positions in Electronic Programming Guide and syndication.

The presenters were a perfect mirror of the confusing market with the UPC settop box for cable users, the Lamabox for bringing internet to the television set and P2Pod, a box for bringing the result of p2p networks to the television set. The software engineers are experimenting and do not have a fixed goal. Both hard- and software manufacturers eventually are confronted with content. Who will bring this together and will make it accessible? Will it be someone from the hardware or software world; will it be someone with knowledge from the television world or will it be a newcomer?