ADSL and cable speed going up

The Netherlands is has a high broadband penetration. Dial-in customers are a rarity these days. ADSL and cable are the conduits. Since 2005 the speed has been raised dramatically. Besides one can get a range of speeds. The Telecom company Versatel sports Fast ADSL+ tops with 22Mbps for television, while cable reaches 20Mbps.

I recently changed from Versatel ISDN ADSL (1Mbps down, 520Kbps up) to Chello (UPC) with 8Mbps down and 1Mbps up. The Versatel connection was not a very stable one. Although the Chello connection is on average higher than the Versatel one, it is not very stable either. My tests through the testing software of Nuria and Speedtest show different results. According to Nuria I have had in the past 14 days and average of 7Mbps. Speedtest recorded varying speeds during the past week, which was noticeable as the radio was interrupted several times. I am just keeping a close eye on it as I eventually want to go to Chello extreme with 20Mbps download. So there is a choice and a wide range of choices and companies, although the incumbent telco KPN is the dominant player.

And there are still developments: a change in mentality on glass fibre and technical development in SDSL. For years we have had a band of glass fibre tifosi. Their vision was that glass fibre had to be installed as soon as possible in order to keep the Netherlands in the forefront of the knowledge industry. A small group of consultants offered the cities of Amsterdam, Rotterdam, The Hague almost the same advice: the municipality should start a glass fibre network as private companies would not invest in it. But the European Commission warned the cities about the conditions to sink money into these projects. In the meantime also private initiatives have been realised, for example in Nuenen, close to Eindhoven, while many plans are on the drawing board in Haarlem and the bulb region in the West of the Netherlands. So the glass fibre networks will be introduced, but the urgency has gone. 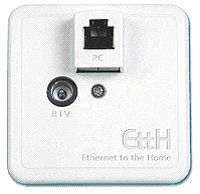 In the meantime the speed of ADSL and cable is getting faster. Top of the list is at the moment Fast ADSL with 22Mbps download. A new development is coming up with Ethernet to the Home (EttH), developed by the Finnish company Teleste and tested by Essent Kabelcom. Advantages of EttH are the lack of a modem as the Ethernet plug is put into the box and the speed is guaranteed. Essent started a test in 2003 in the town of Boxmeer. Presently 10.000 households have the EttH connection at their disposal. They can load up and download at a speed of 10Mbps; the internet connection is symmetric. With the successes Essent will start another project, in which the symmetric speed of 100Mbps will be introduced. Essent will start this project in another town of 20.000 to 30.000 households; no specific town has been assigned yet. Eventually Essent wants to upgrade to 1000Mbps eventually. (Of course plans can change as Essent Kabelcom will get new owners after the completion of the acquisition by venture capitalists).