Story telling in a new town 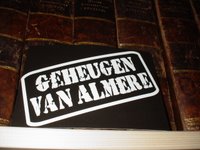 It is now almost a month that we moved shop and house from historic city of Utrecht to the new town of Almere. We left the city with canals, historic buildings and the 112 meter high tower, called the Dom or in Italian Duomo. And we arrived in a town, which has started to be built on reclaimed land some 30 years ago: all buildings are new, all landmarks are modern. In fact the town of Almere is fast becoming the fifth city of the Netherlands with already 180.000 inhabitants. And they come from all around, be it dominantly from Amsterdam. Due to a welcome present I found out that the new town has already a project The Memory of Almere.

Some years ago I was attending a summer school on digital storytelling. One of the projects presented was a Bulgarian one, which eventually became the Goat Milk festival. During this project people went to countryside in order to digitally record stories from the villagers. These stories were later on published according to database publishing principle: from the database articles and books are published, but also broadcasts and movies as well as DVDs. Of course the stories were about the long history of the villagers.

At that time I suggested that the team would come to the Netherlands and would visit the new town of Almere to record stories over there. I thought that it would be interesting to see the difference between the stories of historic villages and towns and a new town. And what do we find in Almere: a storytelling project based on a database publishing principle.

In the project Memory of Almere stories (in the Dutch language) are collected and published. The stories form a multi coloured web which links people with each other and with the city. The project has yielded some 600 stories by now. They have been treated in radio and television broadcasts. A book with stories has been published. A web site is continuously available.

From a first look at the site, I have been unable to distinguish a particular difference between the stories from the historic villages in Bulgaria and the stories of the new town. There are stories, recounting the short history of the new town. But there are also special sub project such as the Memory of Wharfs. And contemporary stories are also stored: the visit of the Queen to Almere on Queens’ Day this year, for example. The database is still growing and stories are added to the database almost daily.

What really surprised me was the number of stories of people telling why they chose for Almere. This is an interesting fact: people from outside Almere keep asking you why you moved to polder, to the city of wind. You can move from Utrecht to Amsterdam or Hilversum without having to account for that choice, but it is different for the new town of Almere. And I must be honest: if you had asked me in 1998, when I organised a review for the European Commission in Almere I would have never thought that I would ever move to Almere. Now my partner and me are having our business here and live here.

We still have a lot of stories to read. It is a pity that you cannot read them. Perhaps the project team should consider making a selection and having them translated into English. The stories could then be shared with people from other new towns such as Milton Keynes in the UK.