Bring your blanket to PICNIC ‘06

Last night I attended a meeting of the partner network of PICNIC ’06 Cross Media Week in Amsterdam.. It was a pre-picnic to the real picnic to be held from September 27-29, 2006. It gave me a chance to meet the Cross Media Week Foundation Board, the PICNIC '06 team, the government, corporate and service partners, plus industry associations, cultural institutions and the media.

Mr Lodewijk Asscher, elderman for the municipality of Amsterdam, hit off the official part of the meeting by stating that the PICNIC meeting had to attract 25.000 delegates in 2010. The event should link creativity and business and make of Amsterdam a creative hotspot. 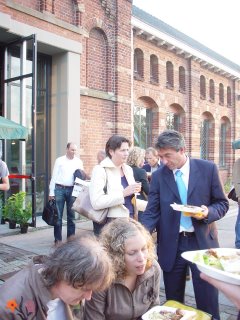 Mrs Karien van Gennip (in the middle of the photgraph), minister for Foreign Trade had also come to the pre-picnic and stressed that PICNIC ’06 should be a great international networking event, produced by a Public Private Network, yielding a gateway to creativity. 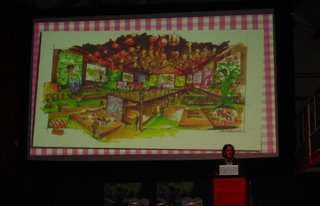 Bas Verhart, one of the founding fathers of PICNIC and managing director of Media Republic, gave an overview of the program and showed an artist impression of the venue (see photograph). The PICNIC will be a crammed event with a conference, specialty workshops, public lectures, an exhibition, art installations and parties. He pointed to the impressive list of foreign speakers such as Simon Guild (MTV), Michael B. Johnson (Pixar), Philip Rosedale (SecondLife) Lorraine Twohill (Google) and Craig Newmark (craigslist). He was also happy to have landed as a speaker John de Mol, who is considerd the father of crossmedia with his format of Big Brother.

At the pre-picnic a representative of MTV Europe announced the project Digital Scout. This project will kick off at PICNIC ’06. The project will solicit ideas on mobile, internet, digital television, gaming and social networking. The person with the best idea will get 10.000 euro to develop and execute the idea. In a leader film produced for the project the basic message was: Don’t hide your ideas.

The pre-picnic was also an occasion to have a look around the venue, Westergasfabriek. This is a former gas plant, which is being remodeled as a venue for cultural events. It is situated in one of the green parks of Amsterdam.

The slogan for the event is: Bring your blanket to PICNIC ’06 and we will provide you with the opportunity to discuss major trends, see innovative content, formats and channels and develop new opportunities.

BTW The Europrix Top Talent Award 2006 and the World Summit Award will present their combined roadshow at PICNIC '06.