The Dutch race for triple play can really start

At the beginning of the week it became clear that cable company UPC was not the candidate to acquire Essent Kabelcom. The investment consortium Warburg Pincus and Cinven, which bought earlier Casema, become also the owners of Essent Kabelcom. By bringing in an earlier Warburg Pincus acquisition of Multikabel, the investors can form now a new company with 3.3 million clients. This new combination will be the largest cable company in the Netherlands relegating UPC with 2.2 million clients to a second place. 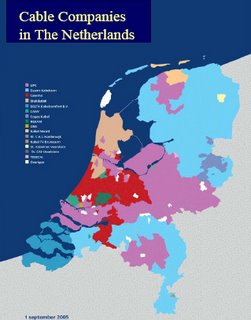 Despite the fact that the Dutch monopoly police MNa still has to approve the mergers (Multikabel and Casema as well as the approved combination with Essent Kabelcom), it is clear that the Dutch cable scene is fast moving into consolidation. I have no new map available yet, but I can make it clear from the 2005 cable map (courtesy of the cable branch organisation VECAI). UPC is servicing the purple area. The new combination delivers services in the light blue area (Essent Kabelcom), Casema the red area and Multikabel the brownish area in the western part of the Netherlands.

The mob-up of the smaller companies can now start. Of the 6,1 cable households there are still 0.6 million clients being serviced by some 25 companies. They usually have started out as local companies and have joined a regional co-operation. However many of those small companies will be unable to keep up with UPC and the new combination as more investments are required to go into triple play and later on into glass fibre.

But the merger is not just news for the cable companies. The new combination will become a serious competitor for the Dutch incumbent telecom company KPN. Cable can even become a more serious competitor when the combination teams up with UPC in order to reach a national presence. The cable companies have become a threat to KPN as they are loosing clients of the fixed net for the fast internet and telephone service. And as 90 percent of the house holds have already a cable television connection it is interesting to subscribe also to fast internet and telephone, having one bill a month to pay.

And KPN is feeling the pain. Despite the fact that KPN made a profit on the second quarter, it is loosing subscribers to the fixed net to mobile operators and to cable operators (253.000 in the 2Q 2006). Some subscribers just go mobile, while others subscribe to the triple play option. This hurts and the pain shows. Last month KPN went to court in a summary procedure, claiming that it was unfair treated by the telecom watchdog OPTA in comparison with the cable operators. The judge could do nothing else but decline the request of KPN, as the summary procedure was not the right instrument for this claim.