So we said goodbye to Versatel and Casema (Versatel still does not want to believe that we terminated the subscription, as they invoiced me for August!) and started to look for a triple play player.

In the Netherlands there are a host of triple play operators. Of course all the cable companies offer television, internet and telephone (in that order). Other operators are: KPN, Versatel/Tele2 and Scarlet. Potentially we have in Almere the choice out of three: UPC, KPN and Versatel/Tele2. All three have an offer, but it is divided in television and a combination of internet and telephone. This makes a financial and programme comparison between the offers almost impossible.

For us the choice was not so difficult. KPN was no candidate; the grand old dame of telephony in the Netherlands needs strong competition to get rid of its monopolistic characteristics. Besides, when we would like to use its services (again), we would have to have a new telephone line installed at a cost. And toVersatel/Tele2 we had just said goodbye. So UPC remained. On the basis of some recommendations from friends, we selected UPC: analogue television, chello classic (8192 Kbps download and 1024 Kbps upload) and Voip telephone.

While registering the helpdesk worker had a tip. We had selected chello extreme, the top end of chello internet (20480 kbps download and 2048 upload), with telephone. But the helpdesk worker advised to take chello classic and telephone as this carried a bonus for six months; after the bonus months we could upgrade to chello extreme and just pay 2 euro more than chello classic. 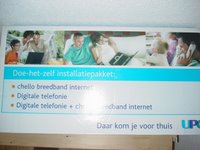 Having registered, we got two big boxes: one with the digital tv set-top box and one with fast internet installation material (see photograph). It should all be easy, we were told by the registration desk and by friends. But of course the configuration in our meter cupboard was more complex. So we ended up with a working internet configuration, but telephony took more time. There were a lot of telephone wires in the meter cupboard and there was a standard KPN connection. Of course we ended up connecting KPN directly to the UPC modem. That was fun, as we still could phone on the account of the former owners of the apartment. Problem was that we could not be phoned. So with the patient assistance of the UPC helpdesk people, the problem was analysed and after an hour of debate the problem was solved. We could phone and could be phoned.

The first experience with UPC classic internet is okay. It looks like the internet connection has morning mood. It looks like it has to be talked to in order to get going. But for the rest it works fine. Internet radio is not interrupted and movies are shown without interruption.