Of e-books and digital paper (5)

Who coined the term e-Book?

When Michael Hart started to type the Declaration of Independence on July 4th, 1971, he typed a computer file and called it an e-text. These days we speak about e-books. But who coined the term e-Book?

Doing research for this mini-series, my eyes caught sight of a legal document used in the case between Random House vs Rosettabooks, a case in which start-up Rosettabooks got a lot publicity, as the big Random House automatically claimed copyright on an e-Book.

In an expert declaration from February 2001 by Andries van Dam, a professor of Computer Science at Brown University, there are very relevant passages about the origin and the usage of e-books as well as about the coinage of the word.

Andries van Dam (his name sounds Dutch or Flemish) has played a key-role in the development of e-books. He was the second person in the USA who picked up a Ph.D. in computer science. He worked with guys like Doug Engelbart, the inventor of the mouse, and Ted Nelson, who coined the word hypertext, as well with Alan Kay, the designer of Dynabook. Van Dam, Engelbart and Nelson were all working in what we would call now word processing and graphics, but what was called idea processing at that time. So Van Dam was well placed for e-Books development and right in the middle of it.

In his expert testimony he tells about the coinage of the word ‘e-Book’: “… by the late 1960s, computer manual for these systems (conventional time-sharing systems, JB), as well as other forms of technical and non-technical documentation, were store and could be retrieved and read on computer screens of various sizes and formats. Additionally,…,students in a section of a 1976 poetry at Brown University read poems and other critical materials on the computer, rather than on paper. It was after this class, in the late 1970s, that I coined the term “electronic book” from which the abbreviation eBook is derived.” This is an interesting statement. Students studied poetry from the screen. They performed actions like retrieving words, counting words and annotating poems. 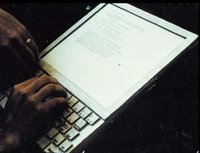 It is interesting that Van Dam indicates in the expert testimony that the eBook should have a dedicated storage and retrieval device: “In 1968, he (Alan Kay) articulated a new storage and retrieval device which he called the Dynabook (Photograph, courtesy of Alan Kay). Kay envisioned that the Dynabook would be the size of a three-ring binder and would have a multipurpose screen that a consumer could use for both reading and writing. His vision of a Dynabook is seen by many as foreshadowing the first portable e-Book reading device and also served as a template for the personal computer.”

Van Dam ends his expert testimony with the following observation on e-Books: “… today’s electronic books, insofar as they enable a consumer to read in electronic form entire texts of works traditionally offered by publishers in paper form, are, in my opinion, the natural extension and outgrowth of the early information storage and retrieval systems of the nineteenth and early twentieth centuries and their subsequent computerization during the 1950s and 1960s. While the fundamental reading experience , with respect to this category of eBooks remain the same, the new technological advances have enabled improved efficiencies , cost savings, an an ability to store books and even entire libraries on portable devices (e.g. on the hard drive of a laptop computer)…”

BTW Rumor has it that the character of Andy in Pixar Studio’s 1995 film Toy Story was named after Andries van Dam (source: Wikipedia)