Of e-books and digital paper (7)

A new way of publishing

Up to the mid-eighties the electronic book had been treated as an extension to the printed books, using the typeset tapes or renewed data-entry. Multimedia was in 1985 not really around so the content of electronic books were still text-oriented. 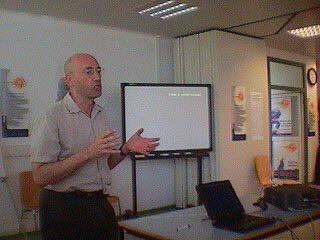 This was changed by Bob Stein (photograph collection Jak Boumans) from 1985 onwards. From 1980 till 1985 he worked as a consultant for the Encyclopedia Britannica and for Alan Kay’s Research Group at Atari. In 1984 he and his then wife Aleen Stein bought the rights to two classic movies Citizen Kane and King Kong for 10.000 US dollars and started the multimedia company Voyager in Los Angeles. This company was to change traditional publishing. Starting with the release of laser disc versions of such films as King Kong and Citizen Kane under the Criterion Collection label, Voyager was from the start focused on the educational possibilities of media. In 1989, Voyager released an interactive guide to Beethoven’s Ninth Symphony, a work that is generally considered the first consumer CD-ROM title which sold more than 130.000 units. The company subsequently released a profoundly diverse catalogue of multimedia projects, expanding the user's experience by adding text, sound, and image to titles ranging from the A Hard Day’s Night, which sold 100.000 copies to Marvin Minsky’s Society of Minds.

Stein did not just add illustrations, movies and sound to text, but also went into structuring books differently. He used the hypertext/hypermedia method of Ted Nelson, offering to the reader a way to link a concept associatively to another term of illustration. When Apple presented the software HyperCard, Bob Stein saw his publishing dream come true and started to build the history book Who Built America? In his series of Expanded Books he put out some 70 books ranging from Michael Crichton’s Jurassic Park to Oscar Wilde’s The Picture of Dorian Gray.

Despite the creative titles, Voyager had problems finding the markets and especially the distribution channels in the pre-Internet period. Bob Stein concentrated his publishing efforts on structuring content; he was sensitive to the operating system, which became clear when he got hold of a pre-release of Apple's HyperCard. But distribution media were not essential to him; Voyager mpublished on Laserdisc, CD-ROM, floppy disc and DVD. By 1995 the Voyager adventure was over. But Bob Stein came back with a vengeance. In 1996 he created the web publishing venture Nightkitchen, which produced TK3 authoring software, which would “enable people - even those with no technical experience- to assemble text, images, audio, and video files into sophisticated electronic documents." Eventually TK3 turned out to compete with Macromedia Director at the top end and with Adobe Acrobat and Power Point at the lower end. And just like Voyager Nightkitchen failed to find a place in the commercial market.

Presently Stein is involved with the Institute for the Future of the Book. He is also Research Director Digital Authoring Tools, USC Annenberg Center for Communication. The importance of Bob Stein’s work is well described in The Teaching of Bob Stein. His digital publishing vision is well summarized in An Introduction to Sophie.