Besides digital paper as one trail to the quest, the electronic tablet was another development close to the newspaper world. It was started by Roger Fidler (see photograph) an old hand at new media at Knight Ridder, as he was already involved in Knight Ridder’s videotext project Viewtron in 1979. In 1992 he became the first corporate director for New Media for Knight Ridder heading the company's Information Design Laboratory, which he established to explore emerging online and electronic publishing opportunities for newspapers. In 1996 he joined Kent State University journalism faculty in 1996 as a professional in residence.

Much of his research work centres on the electronic tablet. In 1994 his department developed a video showing a dummy of the tablet. He travelled around the world with it. I met him with his story in Netherlands in 1995.

Since 2000, Adobe Systems and the Los Angeles Times have sponsored my work at Kent State University to develop an interactive multimedia format for newspapers that would take full advantage of pen-based Tablet PCs, and the anticipated next-generation electronic paper devices now under development by E Ink Corporation, Philips Electronics, and other companies.
The Kent Electronic Newspaper Tablet (KENT) Format, which resulted from this initiative, blends the popular qualities of printed newspapers with the compelling interactive features of the Web in a reader- and advertising-friendly environment. I publicly demonstrated the format for the first time in New York City in 2002, at the first Tablet PC conference. The demonstrations included a complete, fully functional Los Angeles Times prototype and the first Digital Newsbooks; examples of Digital Newsbooks can be downloaded from the Institute for CyberInformation Web site.

Daily newspaper editions based on the KENT Format are still a work in progress. My current efforts focus on the development of XML-based tools that could be used to streamline the production process. 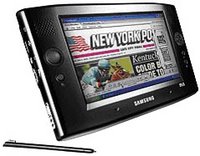 In the meantime tablets have become a common feature in computing. Nokia has launched the Nokia 770. The tablets are not exactly hot, but the newspaper world should take more interest in them and experiment with them. The other day NewspaperDirect announced that through an important new technology relationship with Microsoft, its publishing partners will now have an opportunity to reach the emerging mass market of typically young and technology savvy subscribers who wish to read news and access content while on the move. NewspaperDirect will bring media content to the new category of Ultra-Mobile PCs (UMPC), formerly code named Origami.

The tablet development by itself is not a development in its own right. But the combination of the tablet and digital paper should give another stimulus to the development.