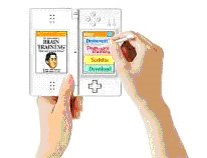 The third lecture was presented by Frank Rittinghaus, salesman with Nintendo Benelux. Having presented a short history of the Nintendo toys (1980 fist Nintendo, 1990 Gameboy, 2006 Nintendo DS/Light DS), he offered some statistics about the Netherlands, where 2,7 million youngsters use internet. When it comes to games, 65 percent play PC based games and 50 percent console games. According to GfK 2006 figures the console game market was good for 83 million euro, while PC games take 40 million euro; less than 1 percent is spent on educational games.

In the meantime Nintendo is expanding its videogame production by spoken assignments and instructions and into wireless games. But Nintendo is also expanding its target group. No longer is the company aiming at youngsters between 6 and 18, but now Nintendo will service people with games from birth to the grave. Implicitly it is addressing the group of senior citizens with brain games (games for seniors). One of the first titles in that series is Dr. Kawashima’s Brain Training. The title is based on material from Dr. Kawashima, a Japanese doctor and brain researcher, and contains a series of mental exercises, from easy calculation sums, reciting aloud pieces of text and remembering a series of figures. Dr. Kawashima is convinced that you can train your brain just like your body. The idea is to train your brain every day and by fulfilling the daily brain age test, you can measure the progress. The senior game does not look like an anti-Alzheimer pill yet, but might have the effect of keeping the mind agile like with crossword puzzles and sudokha.