Of e-books and digital paper (3)

The Memex as prototype

Looking for a first hint of the concept of electronic books in history is not easy. Despite the fact that the search will be limited to the twentieth century, the search depends on the definition of electronic book. Personally I would think that the Memex of Vannevar Bush could qualify as the first hint. Mr Bush was a scientific advisor to the American president Roosevelt. 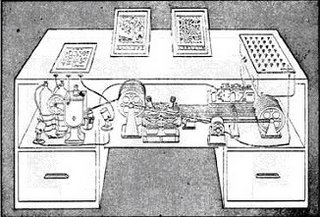 In June 1945 an article by him, entitled As We May Think was published in the The Atlantic Monthly, in which he describes the non-existing machine Memex (Memory extension). He writes: ‘Consider a future device for individual use, which is a sort of mechanized private file and library. It needs a name, and, to coin one at the random, “Memex” will do. A Memex is a device in which an individual stores all his books, records, and communications and which is mechanized so that it may be consulted with exceeding speed and flexibility. It is an enlarged intimate supplement of his memory.
It consists of a desk, and while it can presumably be operated from a distance, it is primarily the piece of furniture at which he works. On the top are slanting translucent screens, at which material can be projected for convenient reading. There is a keyboard, and sets of buttons and levers. Otherwise it looks like an ordinary desk.
In one end is the stored material. The matter of bulk is well taken care of by improved microfilm. Only a small part of the interior of the Memex is devoted to storage, the rest to mechanism.’

Mr Bush’s description was most interesting given the fact that computers had just come around. Some computers had seen some army combat, deciphering coded messages; others were massive calculators for the logistic operations of the army and navy. Ideas about civil applications were still rare at that time.

Mr Bush talks about a sort of library and about stored books. The machine will have the size of a desk and could be handled by everyone. One of the advantages of Memex over existing libraries and printed books, was retrievability. But it was a mechanic retrievability, as the Memex would be a machine for microfilm storage on the basis of photo-electrical techniques. The machine was described by Mr Bush as an analogue device and not as electronic equipment. Interesting is that the stored books were seen as files residing in a machine.

The machine itself can be seen as a precursor of the PC and other devices such as PDAs containing elements of a Windows system and World Wide Web. As such it has become part of the new media, despite the photo-electrical techniques.

The Memex has become the symbol of the personal computer. Implicitly, the stored books were files and the Memex was the device for reading and retrieving texts. So the concept has three elements: content, software to read and manipulate and hardware.