In the mini-series Of e-books and digital paper, I closed instalment 17 with the digital paper as electronic newspaper. I started to look back and noticed that I have not treated Sony’s e-book using digital paper.

As described in the mini-series, Sony hijacked the term Electronic book in the early 1990s. Their first sample had a lousy black and white screen with backlight. After that the company improved the screen dramatically. And while everyone in the western world left the concept of Sony’s e-book by 1995, Sony went on in Japan with promoting e-Books. 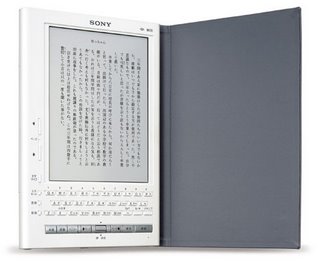 So when in 2005 the digital paper readers came about Sony adapted the e-book reader of that time Librié, which was a variation of Sony’s handheld, the Clié, and fitted it out with digital paper as a screen. So the Librié has now black letters, a white background and two grey tones; the readability is improved in the contrast, the co-reader effect and the 170 pixels per inch.

The Librié model has storage room for 20 books, but with the memory extension Memory Stick Pro, the number of books can be upgraded to 500 books. The reader is 190 grams and has the following dimensions: 126x190x13 millimetres. There is a built-in speaker and ear phone, a dictionary and a USB connection.

Again here the screen freeze once a page is turned. The power is immediately drilled down, so one can read 1000 pages on two penlight batteries. On the side of the screen knobs are available to move back and forth. For annotations a virtual key board on the screen is available.

Will the Librié which was presented in March 2006 be the new book cover of the publishing industry? I am not sure. The price is comparable with iPods: 376 US dollars (276, 96 euro; the price is much better than the first Sony e-book, which set you back for 600+ euro in 1991). But not clear is the policy on the production software (open or proprietary) and the digital rights management software (open or proprietary; the proprietary DRM software is said to be awful). IMHO the price should come down, the software should be open and bestselling publishers should offer their novels of more than 1 kilo on the Librié.

I would think that Sony after so many years of experience with e-Books would have learned enough lessons to get it right. But the fact that the company is still bent on its proprietary production and DRM software, is not a good sign. But if Sony does not get it right, the Chinese will, I guess.

Still I would like to see Sony or another consumer electronics company use its power to change the face of the publishing industry like Apple did with iTunes. The device is there and there are many electronic books available. Now we need a good business proposal in terms of assortment, price per e-Book, DRM, use over more devices, quality of download and distribution.