Expansion is central to the strategy of every company. So also to Essent, a 6.3 billion euro energy company in the Netherlands; also Essent’s cable company Kabelcom works on expansion. After all, adequate expansion constitutes a condition to keeping pace with domestic competition - such as with telecom incumbent KPN - and to continue preserving its leading role in technological developments.

Essent Kabelcom is an important player in the Dutch cable sector. It is active in the areas of radio, TV, Internet and telephony, both for the consumer market and for the business sector. On a daily basis it reaches approximately five million people in the North, East and South of the Netherlands through 1.8 million cable connections. Essent Kabelcom is the second largest cable company in the Netherlands. 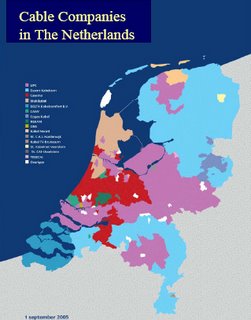 Although Kabelcom has clearly expanded its position and performances in the recent past, one cannot help but conclude that - partly in view of the progressive consolidation of the telecom industry - the time is now ripe to take essential steps towards expansion. Essent is therefore set to explore the opportunities for incorporating or transferring its cable activities to a larger entity.

This step fits in with Essent's strategy to concentrate on its energy activities. Consequently, it stands to reason to transfer the Kabelcom business unit to an owner that is fully capable of realising the necessary expansion in the telecom market. And one that can also provide for a further strategic and commercial reinforcement of Kabelcom's position in the radio, TV, Internet and telephony industry.

Essent has invited a limited number of parties to submit a bid on the Kabelcom business unit. The entire process is expected to take a few months.

So far the press release.

Some facts:
Essent has been an active player in the cable market. It was one of the pioneers of broadband on cable with @Home. Essent Kabelcom is one of the four largest players in the Dutch market:
- UPC: 2,2 million subscribers
- Essent kabelcom: 1,8 million
- Casema: 1,4 million
- Multikabel: 0,3 million

The market play:
Essent has four options:
1. bring the cable division to the stock exchange;
2. merge with Casema, which would make the largest Dutch cable company;
3. merge with Casema and bring to the stock exchange;
4. sale to a cable company such as UPC (might raise problems with the monopoly watchdog (NMA);
5. sale to venture capitalists such as Cinven, Permira and Warburg Pincus; the last company is presently owner of Dutch cable company Multikabel;