Something light today, as it is a holiday in the Netherlands. Yesterday, I took time out to read the blog Ecoauto of my friend Stanislav Miler, Standa for short. He is a Czech by birth, but became roaming European. By training he is a movie maker and he has been working in the field of interactive storytelling. I know Standa from workshops we did together in the framework of the EU funded ACTeN project and of his INYOP workshops in the Czech Republic. 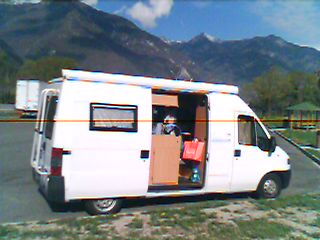 His latest venture is an Eco car, a mobile home and cinema which runs on used vegetable oil. The idea for the Eco Journeys is to travel only by using vegetable oil and collect and publish stories about life of people in different countries. The plan for the first Eco Journey was to go to the Goat Milk festival in Bela Rechka, Bulgaria, than go through Macedonia, Albania, Monte Negro, Croatia Slovenia and Austria back.

This is already fourth year that he is in Bela Rechka. In 2002 Standa have organized with Diana Ivanova, a native organiser, and my Dutch compatriot Paul van Zoggel the first workshop in Bela Rechka. During 10 days they collected more then 100 stories and 500 photographs, reflecting the life of people in this small village, 100 km from Sofia. Thanks to Diana it was possible to start organizing an annual Goat milk festival focused on memories. This year a three days workshop was planned on Personal memories and exhibition. It started on May 24th as a part of the annual celebration in the village Sabor. Later he went to Sofia for a presentation, which was part of the Mobile Studio Happening on a big square. There he and the group were doing a miniature Goat Milk festival, collecting stories, making photographs and movies. 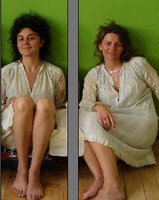 The method Standa and his friends use, is very interesting. They collect stories, take photographs, shoot movies and record music. All this material is used to produce television programs, websites, CD-ROMs, books and magazine articles in several languages. Diana Ivanova (left) and Mariana Asenova (right) are the local cross media producers. For production the group experiments with content management systems such as Korsakow.