The last sub-section of the seminar concentrated on streaming. In the past years streaming in the Netherlands has been a special point of attention in the academic and educational area. SURFnet has been a propagandist of broadband and especially of glass fibre. From 1999 onwards the project Gigaport started to demonstrate the broadband applications. In practice the public and commercial broadcasters started a co-operation with the ISPs in Streamgate in order to streamline the broadband volume.

Harry van Vliet, researcher at the Dutch Telematica Institute looked back at the developments of TV. His first position was: No SELFTV without personal TV. Personal content is growing into large reservoir. This throws up the question: how will I find the information: through a commercial, not fully reliable Google or through the recommendation of friends. The second position was a confession. Years ago he was preaching interactive television. But now he confessed that the score between Internet vs TV was 2-1. The flight forwards for TV had not materialised. Interactive TV does not exist, enhanced TV does.

Chris Herreburgh of Dutch View webcasting looked at the traffic on internet. He posed the question whether the net will become congested due to consumer publishing. He himself is convinced that broadband is not the factor which stimulate consumer publishing. He showed that in ADSL downloading has grown 12 times in the Netherlands in the past years, while uploading has grown only four times to an average of 1 Mb; or to demonstrate the growth with the UPC Extreme cable product: downloading 20Mb; uploading 2 Mb. This slow growth of broadband volume can not be responsible for the growth in consumer generated content. So people like to generate content, regardless of broadband bandwidth limitations.

Erwin Blom of the VPRO broadcasting company proclaimed the end of scarcity in bandwidth. The limited number of radio and television channels will disappear and make place for an indefinite number of channels. This will yield competition everywhere. The user will have power in order to program. The receiver becomes the sender. The new receivers turned sender will be youngsters growing up with a compute; they will download music and movies, will play games and will hardly read a book. He put the question more pregnant; by asking what the world would have come to if Gutenberg had not invented books, but games. Would the games have been cursed? Books would have been cursed as isolating a child hopelessly. 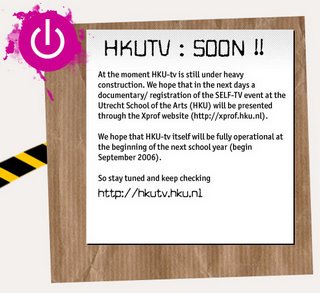 At the end of the day HKUTV was launched, an internet channel for the college community, but also for alumni and interested people. The channels is still under construction, but some items were shown already. Whenever it will launch fully, the archives of the seminar SELFTV will be available.