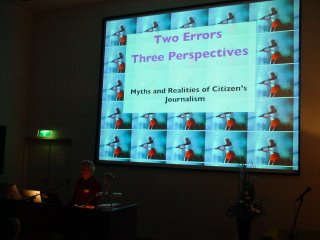 The theme of the seminar was introduced with David Garcia, professor of Design for Digital Cultures. This was a nice surprise. Usually this type of seminars start with some technical introduction or go straight into applications. But this seminar took a cultural perspective to start and to end with. At last new media are not so new anymore and get a place in daily life.

David started to ask himself about the myths and realities of citizens’ journalism. Where lays the value of this phenomenon. Is it amateurism elevated? As a starter he pointed to the exhibition which was spontaneously organised after the 9/11 event. A gallery organised an exhibition of photographs from professionals and amateurs. It became a democracy of photographs; culture created by multiples. And we see in examples as the Shoah Foundation by Steven Spielberg, that the database becomes a collection of cultural artefacts and a citizens' memorial. David Garcia thinks that citizens’ journalism is not just a dumbing down of people, which happens in Big Brother, but becomes more an expression of citizens.

To firm up his position, David Garcia, jumped back in history, to the naturalism movement in the 19th century. Writers like Flaubert, painters as Millet and sculptors as Renoir were the custodians of ordinary people. They represented in their books, paintings and sculptures the daily of people in the cafes and in the park. These artefacts show culture plus a democratic process. There was however one problem: the subjects were represented and did not have the skills themselves to give them a voice. This happened in the movie Nanook of the North in 1922. It is a reconstruction of the life of the Inuit filmed by a moviemaker and some of the Inuit. The movie became a citizens’ medium, giving it a unique sense of reality.

Video was taken into the journalism atmosphere when the beating of Rodney King was recorded by George Holliday, not a professional, but a bystander. Lawyers for the cops reconstructed the narrative of the video and got the policemen off. And they have known it: LA erupted with violence and fire.

But the Rodney King recording was still an incident of citizens’ journalism till Blogger came. Blogger is to internet, what the camcorder is to TV. Since the introduction we have seen the Baghdad blogger on the Iraqi war; just an ordinary guy in an extra-ordinary situation. The guy went through the transition of becoming an expert from being an amateur. In this light you can even pose the question whether Anne Frank’s diary was a form of citizens’ journalism.

Presently we see more instances of citizens’ journalism. In the movie Wartapes, the director gave amateurs a camera. Their recordings were mixed with material of professionals. Also Current TV mainly uses material from professionals; one-third of the materials comes from amateurs, who are paid 500 to 1000 dollars for their contributions. So there is not a rip-off like in the best home movies shows and reality shows.