Yesterday I was a delegate at the SELFTV symposium in the Dutch broadcast city of Hilversum. The conference was organised by the department Art, Media and Technology of the HKU. 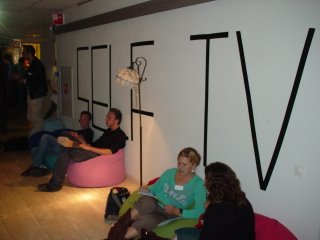 Presently several initiatives in streaming and casting of interactive content pop up. It looks like the new-media prosumer wants to have his/her favourite channels always on, anytime at any place on his/her favourite platform. But besides being a prosumer, the user also becomes a content creator and a supplier due to the success of blogging, vlogging and podcasting. This is the background of SELFTV.

What does this digital spring in the broadcasting area mean for producers, distributors, syndicators and consumers of interactive content? What chances do these new broadcast opportunities hold for multimedia developers? What are the initiatives of the incumbent and new broadcast companies in their fight for the eyeballs?

I will report on them in coming days. I will start tomorrow with the presentation of David Garcia who put some cultural background to civic journalism. In the next blog I will present some civic journalism initiatives (including figures and guidelines). Another blog will be devoted to the cross-media applications. Live and on-demand streaming will get attention.

At the occasion of the seminar the department Art, Media and Technology of the HKU launched its own internet channel HKUTV. You can have a look, but I do not guarantee that it works; when I looked at the channel I got to the homepage, but coiuld not play any item, not even the announced archive of the seminar.