A case of citizens’ journalism 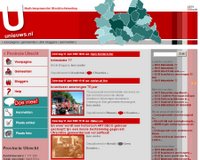 After the cultural perspective the daily nitty gritty was tackled again. How does citizens’ journalism work in media like television? Machteld Smits, managing editor with the regional radio and television station RTV Utrecht told about the experience of the station with citizens’experience. RTVU is the first regional rtv station in the Netherlands that started a citizens’ journalism project.

The station started to offer bloggerspace on internet Unieuws.nl, which translates to Your/Utrecht News, last year. The site is presented as a kind of a public mail service for the editorial staff, a space to inform the editorial staff of the station about news in the neighbourhood. The objective is to link messengers and politicians and to offer news produced by the editorial staff with the help of citizens. From text and photograph postings on the blogspace newsitems can be filtered. In two weeks, civil bloggers can also offer movies. In principle everyone can influence the agenda of the station.

So far 1.000 postings have made, which solicited 2.500 reactions. More than 15.000 pageviews were recorded. The site has now 400 bloggers. The site is moderated. The editorial staff thinks that 15 percent of the postings and reactions are usable, while only a few postings or reactions lead to a journalistic item. Presently one staff member (1 FTE) takes care of the moderation.

Last years’ local elections for the municipal board were the occasion to start the citizens’ blog. Now after a year the editorial staff wants to go further. The next step will be a project in which a school and two families in a particular neighbourhood get cameras. Their movies will be edited and shown in the news broadcasts.

The editorial staff has produced a set of rules for citizens’ journalism:
1. Make the site as popular as possible by cross promotion, by offering presents to bloggers.
2. Accept that 5-15 percent of the postings and reactions are interesting to produce items from.
3. Develop a method for moderation and filtering. You can use a rating system by readers for the postings such as starts.
4. Stimulate regular postings by informing the audience about radio and television items under production.
5. Translate blogpostings and reactions in to items for radio and television.
6. Form themes or categories by tagging.
Overall advice from Machteld Smits was: CHERISH BLOGGERS.