Rotterdam has opened the (Dutch language) website Spirit of Media as its window on the city’s new media activities. The site has been initiated by the Development Board of the City of Rotterdam (OBR) and is part of the city’s drive to put the digital creative industry on the map.

The site is intended as a continuous actual survey of new remarkable projects, news items and developments. It is intended to keep the Rotterdam inhabitants up to date and offer a feeding ground for companies to co-operate.

The site has six categories: audio; movie and tv; animation; gaming; internet and communication. Besides projects and progress reports on projects there are weblogs and fora, information on education programs as well as job vacancies of companies and institutes.

It is interesting to see that new media have become part and parcel of city marketing. Since the book of Richard Florida the general denominator has become the creative industry or more specifically the digital creative industry. In the past year every itself respecting city had a study done on the creative industry in the city. And there is a lot of competition in the Netherlands between Amsterdam, The Hague, Rotterdam and the region of Eindhoven region. Amsterdam likes to profile itself as the cultural capital of the Netherlands and has annexed the new media as part of this. Its latest showcase will be the cross media exhibition Picnic 06 from 326-30 September, 2006, an event endowed heavily by the City of Amsterdam and the Dutch government. The Hague likes profile itself as the Telecom city of the Netherlands. The region of Eindhoven is more technical oriented, being the homebase of Philips. 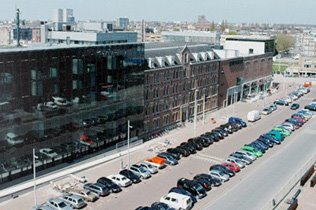 And the creative industry is not only the objective of city marketing, but also the facilitating of glass fiber networks belongs to the package. Amsterdam is preparing a glass fiber network, depending on the consent of the European Commission. The Hague is working on a plan. OBR in Rotterdam works on a glass fiber network. The pearl of the glass fibre networks is the private, already installed network in the village of Nuenen, one of places painted by Vincent van Gogh.