Expertise Day at the HU FCJ (4)

The last position in the programme of the expertise day was reserved for me. I had been asked to speak on communities as many students are intrigued by this phenomenon. Of course it is interesting and a little bit fashionlike especially after the successors of Web 2.0 like Web 4.0.

I took the sociology of communities as a start, but this was just a lead on to e-communities. Why do we speak about communities in the online period more than we did in the analogue period? Of course newspapers had and still have letters to the editors and television stations even have sessions with complainers. But in the new cyber age, audiences no longer are ruling, but communities.

Some time ago I heard communities in the cyber age explained by Alexander Felsenberg, my German friend and WSA board director. It was during a meeting in Vienna on ICT and creativity and as a reporter for a workgroup he was asked to explain e-communities. He came up with a model, which indicated that ICT helped in community building and creativity collectively and in collaboration. The community feeling is facilitated by interactivity; people can react straight to a text, multimedia or video message. 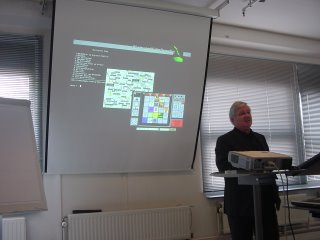 Communities in the online world became clear when e-mail became common. It became especially a new way, when the bulletin boards became a message and chat exchange and spilled over in discussion lists and fora in the internet era. In the Netherlands internet started out with the phenomenon of digital cities. DDS in Amsterdam started on January 1st, 1994 and was the first consumer site. It took after the freenets in the USA, where in big cities the metaphor of cities was used for social networks. I showed two menu pages of DDS and a prototype page (click on the photograph to enlarge), which have been saved for the future by the DDS Archeological Service.

In the Q&A a student asked what the continuity is of these relation networks. It looks like they are two years favourite sites and are succeeded by new ones. From experience I know that I started to hate networks like OpenBC, especially as some of the subscribers are chasing links for the record. I think that his observation was a sharp one. Relation networkd do improve over time, but they also become more commercial and loose the objective.