The trip for the kick-off meeting in Italy was quite an enterprise. The situation for flying is hampered by the limbo situation of the airline Alitalia. It was not very reliable in the past with all the strikes, but presently they just drop flights, as partner Nick found out. To be sure I booked flights with Lufthansa and it subsidiary Air One. All connections worked: from Amsterdam to Frankfurt, from Frankfurt to Bologna and from Bologna to Lamenzia Terme. I almost missed the flight to Lamenzia Terme as in Frankfurt there was a lot of fog and planes took to the air slower than normal. With some 30 minutes to go and new check-in with Air One I made it just in time. Up to Lamenzia Terme, which is in Calabria. I have never been further than Rome, but this time I was going even beyond Naples. On the trip back everything worked out okay: planes were in time in Rome and Munich. But all together the trip has taken a lot of time with all the after flight arrangements with taxis and trains. 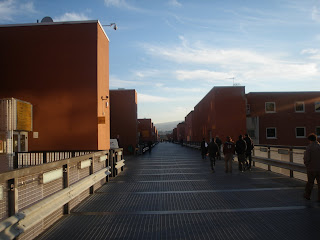 However it was like coming home, but now in Calabria. I met Marcella again, one of the inspirators of the project SCIENAR. I met her some 5 years ago at a summerschool in Salzburg; I guess the one where the interactive musical Sound of Music was produced. But also George, but Sam for his friends arrived from Romenia through Rome by plane and train. There were also new people to meet such as Nick, an entrepreneur in digital e-learning. And of course Mauro was there, one of the academics in the project. Besides these people there were also people of the University of Calabria, especially Lorella, the project manager, who was instrumental in the process of submitting the proposal SCIENAR to the European Commission. Absent was Monika from the Comenius University in Bratislava, who had to present a paper at an important conference... It looks like an interesting bunch of people who will become a solid team. We talked a lot together in formal meetings but also over dinner sessions.

The work will have to start now. One of the first tasks is to set the scope by making an inventory of examples showing the relationship between science and art. One of the first examples for me is then Escher, the Dutch artist, who produced drawings with mathematical riddles. There is an interactive museum these days near The Hague. It is high time to visit it in January. Sam my Romanian friend pointed to the sculptor Brancusi. Sam and the Institute for Computers in Bucharest produced in the late nineties a CD-ROM, which was nominated for the Europrix, if I remember correctly. Now Sam and his team have produced a new edition. Sam presented the team with copies. This will be good for some hours of joy.