In the past week the news was published that laptops are succeeding desktop computers in sales. But more is happening: the sale of electronic book readers is picking up pace and the e-readers are getting cheaper.

The range of 6 inch screen readers was opened by the iLiad of iRex Technologies. Soon a slew of e-readers followed. They were cheaper than the iLiad, partly due to the fact that these readers do not have a wifi facility on board. Sony has made hay of this situation with the PRS 700, which is on sale for 300 euro. But now a major move is coming up in the new year. 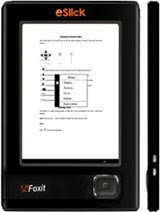 From the US a new unit will come which will cost under 200 euro. The e-Slick reader will be available from Foxit. The reader has a6 inch screen, 128 Mb internal memories and a SD card slot for SD cards up to 4Gb memory. It supports PDF and TXT formats and has a built-in mp3 player, which makes it interesting for audio books. It weighs 180 gram and is 9,2 millimetres high. It looks like many of the other readers such as Hanlin. For the time being the eSlick will be available only in the USA from February/beginning of March 2009. But even there it will create a stir with regard to the price. The Kindle (with wifi) costs 359 US dollar; the iLiad with wifi costs 599 euro. The Wifi-less iLiad Book edition ships for 499 euro; the Sony reader PRS 700 has a price tag of 399 US dollar. But the eSlick will cost 229,99 US dollar at launch, but the price will be 259 US dollar after the introduction.

The announcement of the succession of desktops by laptops will give an extra incentive to the sale of the e-book readers. The reader will be seen as a different device to the laptop, but will compete with the sub-notebooks like the Asus EEE. The e-book readers will also get competition from the smart phones like the iPhone.